114 Avery Hall
Free and open to the public.

Performing History addresses performance as a medium for critically engaging cultural history. While permanent monuments can idealize and cement historical narratives, performances can render visceral the complexities of social histories. All of these speakers experiment with inserting history into everyday life, creating public experiences that slip between past and present.

Kate Gilmore is an artist and Associate Professor of Art and Design at SUNY Purchase College. She has participated in the 2010 Whitney Biennial, The Moscow Biennial (2011), PS1 Greater New York (2005 and 2010) in addition to solo exhibitions at The Everson Museum, Aldrich Contemporary Art Museum (2014), MoCA Cleveland (2013), and Public Art Fund (2010). She has been the recipient of the Art Prize/ Art Juried Award, Grand Rapids, Michigan (2015), Rauschenberg Foundation Residency Award (2014), Rome Prize from the American Academy in Rome (2007/2008), Lower Manhattan Cultural Council Award for Artistic Excellence (2010), “In the Public Realm”, Public Art Fund (2010). Her work is in the collection of the Museum of Modern Art; Brooklyn Museum; Whitney Museum of American Art; Museum of Fine Arts, Boston; and San Francisco Museum of Modern Art. Gilmore received her MFA from the School of Visual Arts, New York (2002) and her Bachelors degree from Bates College, Lewiston, ME (1997).

Bryony Roberts is designer, artist, and scholar. Her practice combines methods from architecture, art, and preservation to produce transformations of existing architecture. She has created projects for international architectural sites including the Piazza del Campidoglio in Rome, Federal Plaza in Chicago, American Academy in Rome, and Neutra VDL House in Los Angeles. Her work has received a Graham Foundation Individual Grant and was featured in the Chicago Architecture Biennial of 2015, in addition to solo and group exhibitions in Rome, Boston, Berlin, Los Angeles, Houston, and New York. She has published her research in Future Anterior, Log, and Architectural Record, has co-edited the volume Log 31: New Ancients, and recently Tabula Plena: Forms of Urban Preservation. She earned her B.A. from Yale University and her M.Arch from Princeton University, and was awarded the Rome Prize from the American Academy in Rome (2015-2016). After teaching at the Rice School of Architecture and SCI-Arc, she currently teaches at the Oslo School of Architecture and Columbia GSAPP.

Xaviera Simmons is an artist whose body of work spans photography, performance, video, sound, sculpture and installation. She defines her studio practice, which is rooted in an ongoing investigation of experience, memory, abstraction, present and future histories-specifically shifting notions surrounding landscape-as cyclical rather than linear. Simmons received her BFA from Bard College (2004) after spending two years on a walking pilgrimage retracing the Trans Atlantic Slave Trade with Buddhist Monks. In 2015, Simmons was awarded the Foundation for Contemporary Arts (Robert Rauschenberg) grant. Simmons has exhibited at The Museum of Modern Art, MoMA PS1, The Studio Museum In Harlem, The Contemporary Arts Museum Houston, The Public Art Fund, and The Sculpture Center. Simmons is currently a research scholar at The Arthur and Elizabeth Schlesinger Library on the History of Women in America at Harvard University.

Andrés Jaque is an architect and founder of the Office for Political Innovation, an international architectural practice that was awarded the Silver Lion for Best Research Project at the 14th Venice Biennale, the Dionisio Hernández Gil Award, London Design Museum’s Designs of the Year Selection, Mies van der Rohe Award (finalist) and Architectural Record’s Designers of the Year Selection. Their publications include PHANTOM. Mies as Rendered Society, Different Kinds of Water Pouring into a Swimming Pool, Dulces Arenas Cotidianas or Everyday Politics. Their work has been covered in A+U, Bauwelt, Domus, The Architectural Review, and The New York Times; and exhibited at the MoMA, London Design Museum, MAK in Vienna, Tel Aviv Museum of Art, and RED CAT.

114 Avery Hall
Free and open to the public. 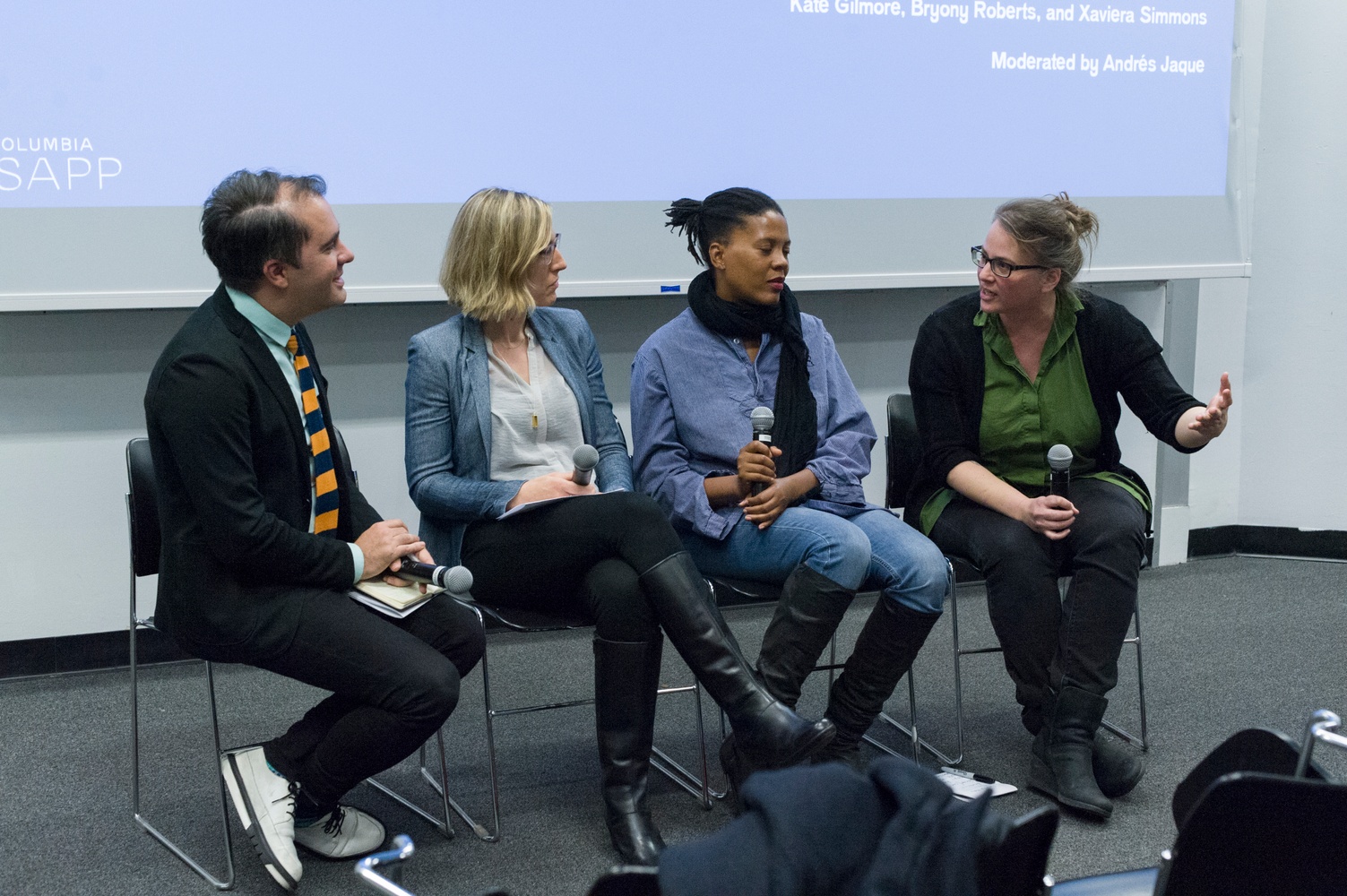