New books, articles and social media posts abound proclaiming the death of New York, portraying the metropolis as a cultural wasteland laid barren by chain stores, luxury condos and neoliberalism; while ample evidence exists to support these claims, evidence also exists to refute them with the emergence of new cultural institutions, grassroots arts organizations, and population growth surpassing projections, all of which begs us to ask in this panel, is New York dead?

Kevin Baker (CC ‘80), is a novelist, historian, and journalist, based in New York City. He is the author of five novels, including his four historical novels about New York, The Big Crowd (Houghton Mifflin Harcourt, 2013), and his “City of Fire” trilogy—Dreamland, Paradise Alley, and Strivers Row—all from HarperCollins. Kevin is also the author or co-author of four nonfiction books, and the graphic novel, Luna Park. He has written for many major periodicals, and is currently a columnist and contributing editor at Harper’s Magazine. He was a 2017 Guggenheim Fellow for a history of America between the world wars, to be entitled, The Invention of Paradise, and at present he is completing a history of New York City baseball and working on a documentary script for Florentine Films.

Vishaan Chakrabarti is Associate Professor of Practice at Columbia GSAPP, where he teaches architectural design studios and seminars on urbanism. Chakrabarti is founder of the Practice for Architecture and Urbanism (PAU), a New York architecture and planning practice dedicated to the advancement of cities. Current projects include Brooklyn’s Domino Sugar Refinery, Queens’ Sunnyside Yards, Philadelphia’s Schuylkill Yards and a contemporary urban bazaar in Ulaanbaatar, Mongolia.

From 2009 to 2015, Chakrabarti served as the Marc Holliday Professor and Director of the Master of Science in Real Estate Development program at Columbia GSAPP. While there, he became the founding director of the Center for Urban Real Estate (CURE). Chakrabarti is widely credited for transforming the program into one of the finest programs of its kind by establishing an interdisciplinary mission that focused on the potential role urban development could play in generating groundbreaking design, greater sustainability, and shared economic prosperity.

José Esparza Chong Cuy (CCCP ‘12) is Executive Director and Chief Curator at Storefront for Art and Architecture. Most recently, he was the Pamela Alper Associate Curator at the Museum of Contemporary Art Chicago (MCA), which he joined in 2016. At the MCA, he co-organized a major collection exhibition to celebrate the museum’s 50th anniversary and curated solo shows of Tania Pérez Córdova and Jonathas de Andrade, as well as a major commission with Federico Herrero. Esparza Chong Cuy will continue to oversee a collection show of recent acquisitions, and a large-scale retrospective on the life and work of Lina Bo Bardi, co-organized with the Museu de arte de São Paulo and the Museo Jumex in Mexico City.

Prior to the MCA, Esparza Chong Cuy was Associate Curator at the Museo Jumex, where he worked with artists such as Pedro Reyes and Alexandra Bachzetsis. From 2007-2012 he lived in New York and held positions as Curatorial Associate at Storefront for Art and Architecture, Research Fellow at the New Museum, and contributing editor at Domus magazine. In 2013 he was Co-Curator of the Lisbon Architecture Triennial, titled Close, Closer. He is a graduate of Columbia University’s M.S. in Critical, Curatorial, and Conceptual Practices in Architecture.

Risa Shoup is the Executive Director of Spaceworks, a New York City-based nonprofit cultural community development organization dedicated to expanding the supply of subsidized rehearsal, studio and community space for New Yorkers. We do this in collaboration with artists, partners and neighborhood residents. Spaceworks is committed to preserving, protecting and restoring cultural legacies in collaboration with our partners and neighbors. Shoup has worked for the past 14 years in NYC, focusing on the production of subsidized space for arts and culture that elevates and strengthens local communities. They serve on the boards of Naturally Occurring Cultural Districts New York and The Invisible Dog Art Center and on the planning committee for the American Museum of LGBTQ+ History & Culture. They were a consultant for Create NYC, New York City’s first-ever cultural plan.

Galia Solomonoff (M.Arch '94) is an Associate Professor of Practice at Columbia GSAPP. As Principal of SAS/Solomonoff Architecture Studio in Chelsea and a registered architect, she has worked with over 40 international artists, creating installations in homes, museums, airports and the public way. As architect of Dia:Beacon, Solomonoff collaborated with artists Robert Irwin, Richard Serra, and Michael Heizer among others to interpret their sketches into permanently built artworks. For The Jewish Museum and the Institute for the Study of Ancient History, Solomonoff is engaged in ongoing assignments to design temporary exhibits, ranging from Chagall to Modigliani, Islamic Manuscripts to Burle Marx and Ancient History. Her expertise extends to art centered restaurants, such as Kappo Masa for Larry Gagosian at 980 Madison which features works by Picasso and Russ and Daughters at The Jewish Museum with a mural by Maira Kalman. At Columbia GSAPP she engages in discussions of art, architecture, and how to further their public democratic mission in the cultural and political sphere.

Organized by Columbia GSAPP.
Free and open to the public, advanced registration is required to attend, RSVP here. 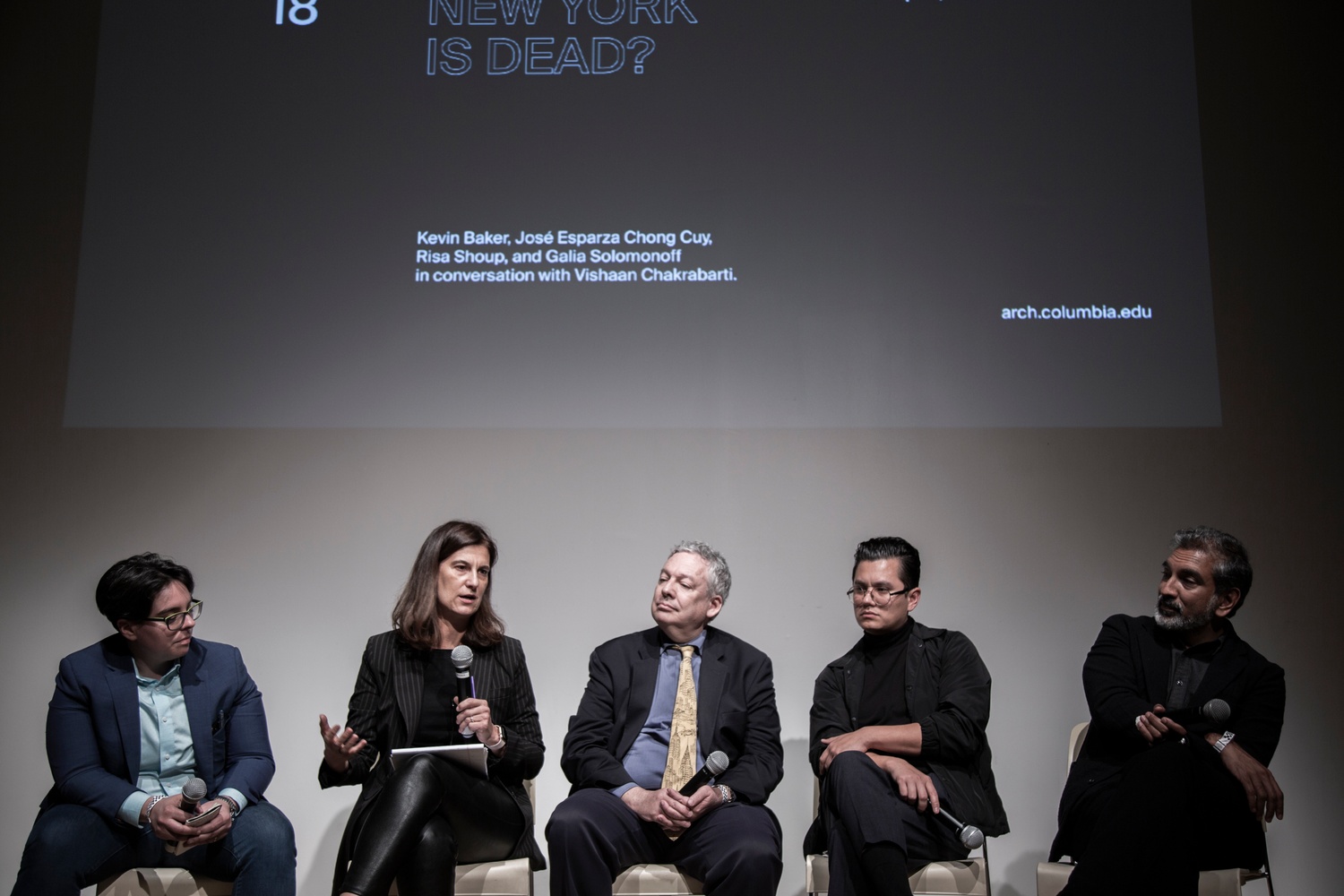 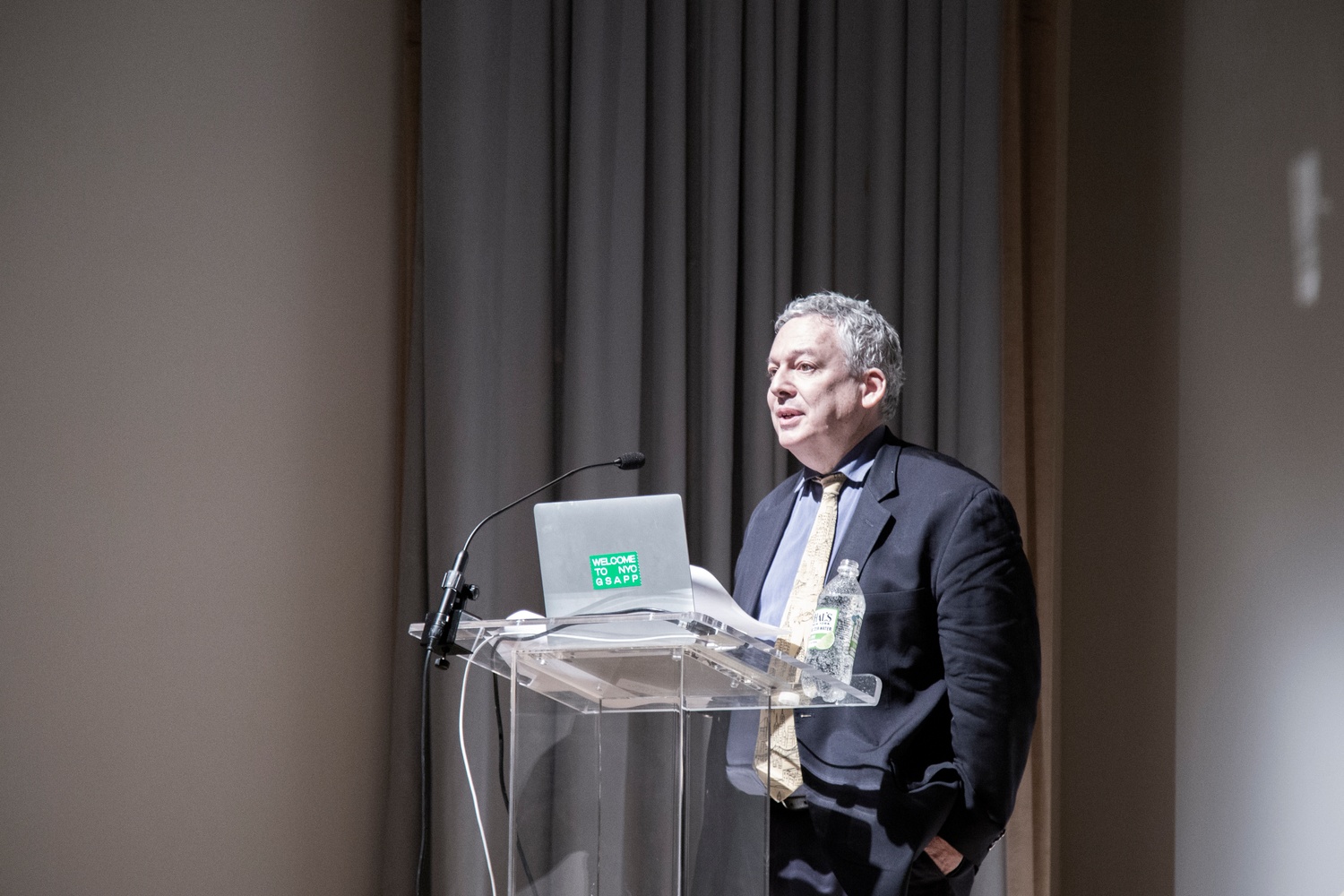 Kevin Baker presents “The Death of a Once Great City: The fall of New York and the urban crisis of affluence” at the event “NYC is Dead?” on April 18th, 2019. 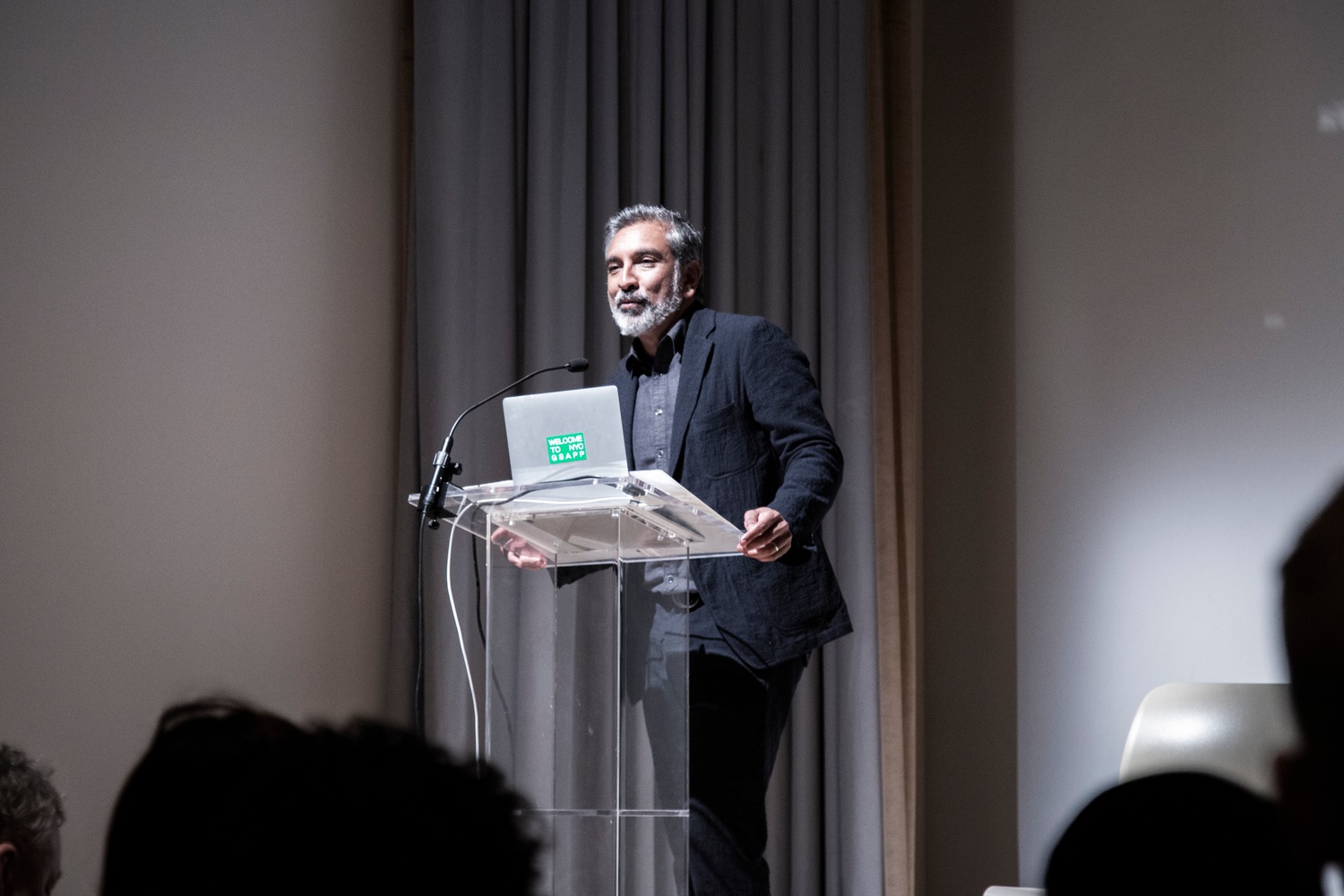 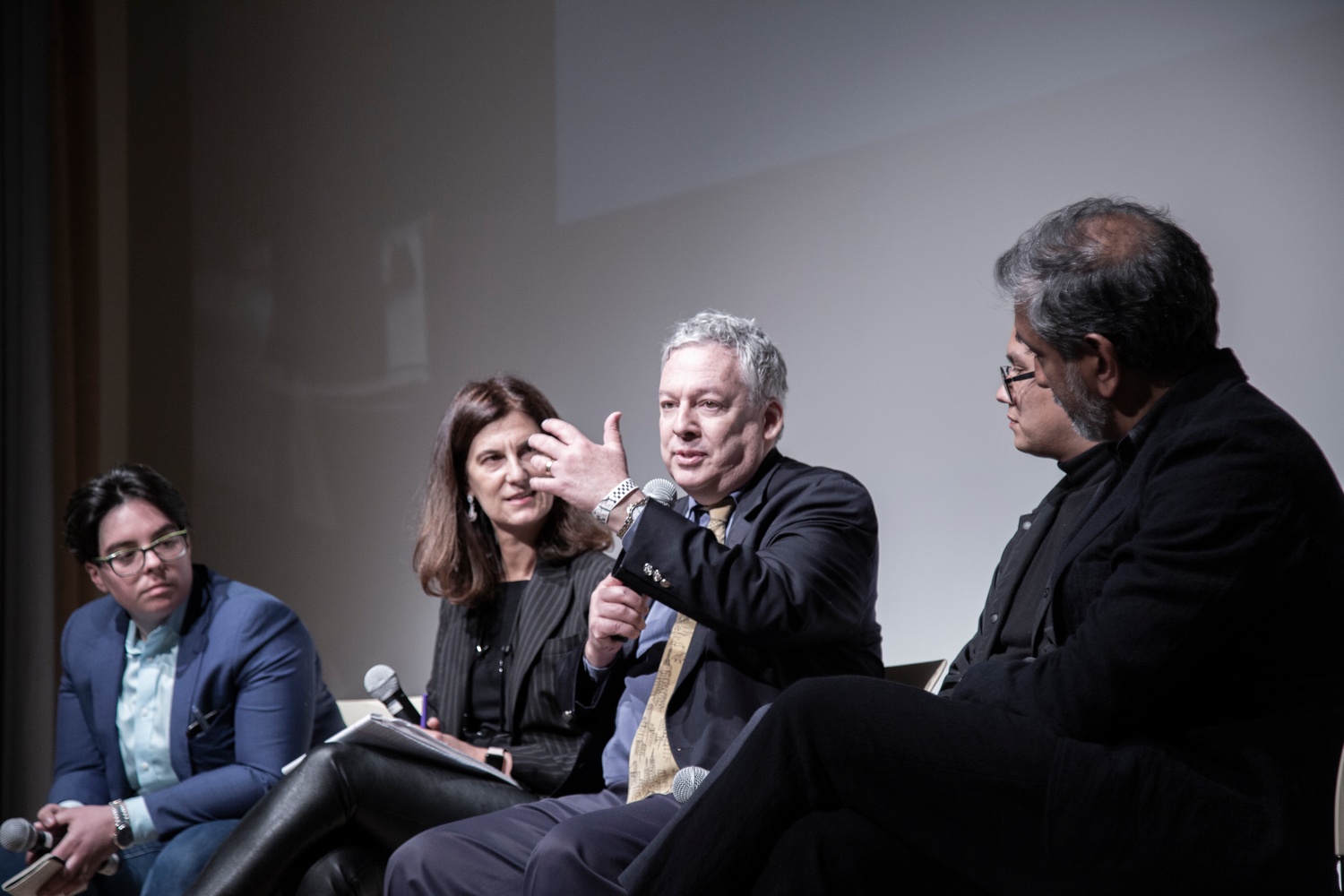 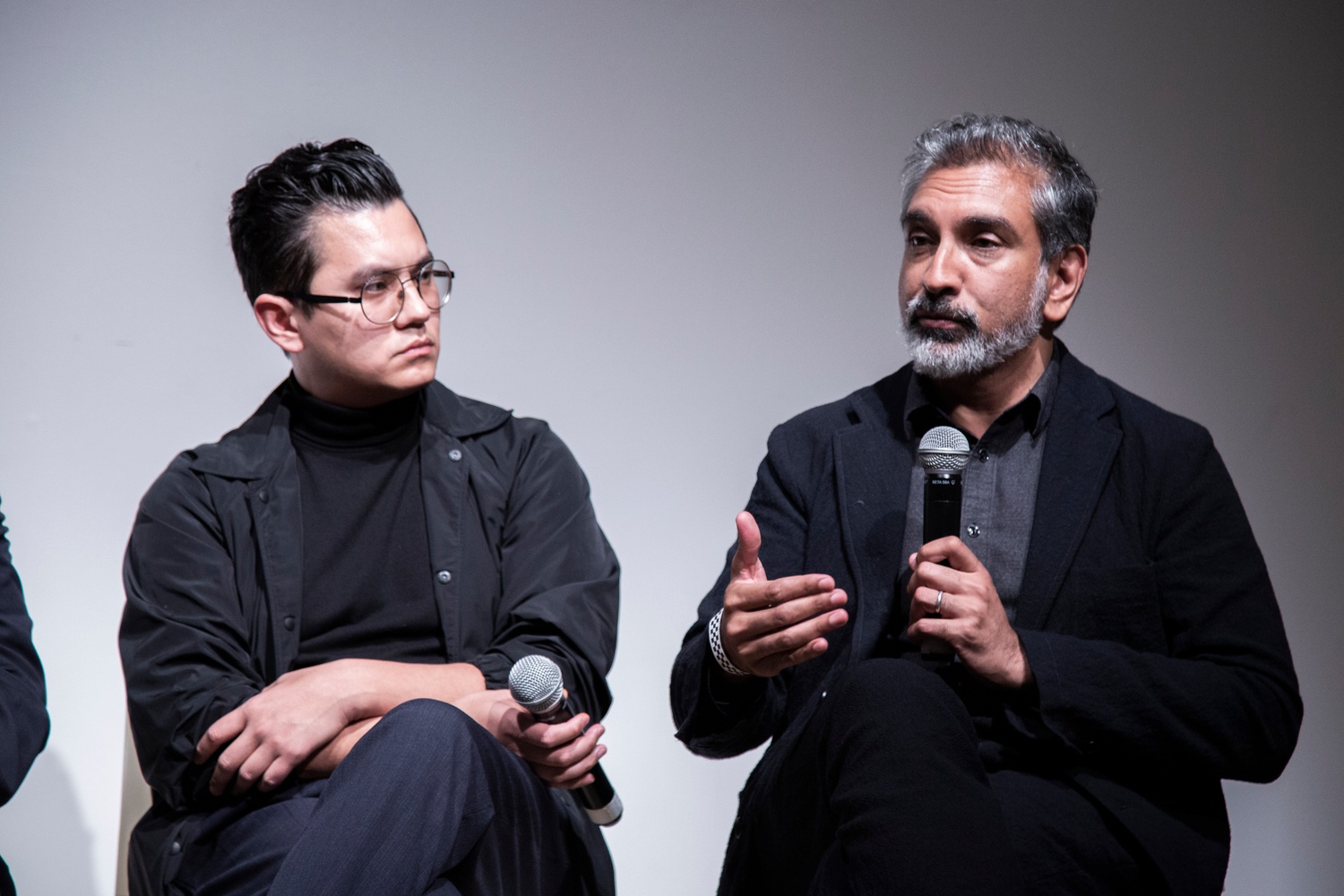 Jose Esparza Chong Cuy and Vishaan Chakrabarti in conversation at the New Museum Auditorium during the event “NYC is Dead?” on April 18th, 2019.