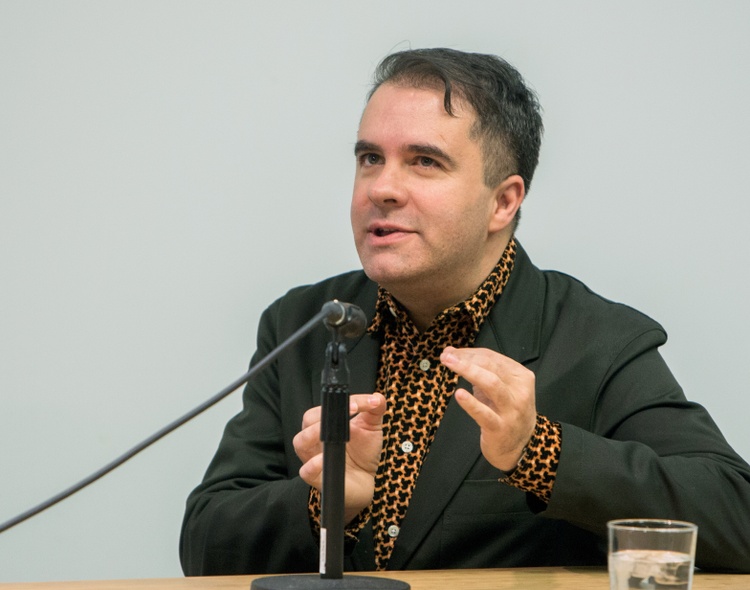 Dean Amale Andraos of the Columbia University Graduate School of Architecture, Planning and Preservation (Columbia GSAPP) announced the appointment of Andrés Jaque as the new Director of the Master of Science in Advanced Architectural Design program effective June 1, 2018. Jaque is the founder of the Office for Political Innovation, an architectural practice based in New York and Madrid, Spain, and has been teaching advanced design studios at Columbia GSAPP since 2013. His internationally influential practice encompasses design projects alongside performance, publishing, and exhibition-making. Jaque succeeds Associate Professor Enrique Walker, who directed the program from 2008 to 2018.

“I am thrilled for Andrés Jaque to take on the directorship of GSAPP’s Advanced Architectural Design program. He has been an important member of our faculty who is greatly admired by faculty and students alike for his unique reframing of architecture and its ability to engage the urgent issues of our time, as well as his ability to re-shape design and contemporary practice through his influential pedagogical approach,” said Dean Amale Andraos. “I’m very thankful for the rigorous vision and dedication that Enrique Walker has brought to the program during his directorship. Enrique established a strong legacy of bringing experimental approaches to research and design, and built a program that is firmly grounded in forming positions through design.”

Columbia GSAPP’s Master of Science in Advanced Architectural Design is a three-semester degree for outstanding students who already hold a Bachelor or Master of Architecture degree. The program is renowned for giving students a framework through which both academic and professional concerns are explored. Enrique Walker established the ongoing “Arguments” seminar course and guest lecture series in which a range of invited speakers present a specific idea or project that is then critically engaged by the students. He will remain an important part of GSAPP’s faculty through his teaching.

Andrés Jaque becomes director of the program at a moment of strength, and is well positioned to further develop the role of architecture as a critical practice based on the debate of ideas, innovation, and experimentation. “More than ever, architecture is now a key player in the challenges the world faces. The AAD program occupies a unique position from which the relevance of architecture can be claimed, explored, and expanded - both as a need and as a great opportunity to reinvent the way we related to environments, technologies, and cultures,” said Andrés Jaque.

Andrés Jaque received his Ph.D. from ETSAM, Spain, and is the recipient of a Silver Lion for Best Research Project at the 14th Venice Biennale and the 10th Kiesler Architecture and Art Prize, Vienna. Among other recognitions, his firm the Office for Political Innovation has won the MoMA PS1 Young Architects competition, the Dionisio Hernández Gil Award, London Design Museum’s Designs of the Year Selection, and was a Mies van der Rohe Award Finalist. His work challenges conventions and assumptions through built work and publications as much as through performance and teaching. His architectural works include the Plasencia Clergy Hall of Residence, the Escaravox, Cosmo, and the House in Never Never Land. His project IKEA Disobedients is the first architectural performance to be acquired by the Museum of Modern Art, the Superpowers of Ten performance has been presented over the course of several years at international biennials and museums, and Phantom - Mies as Rendered Society was installed at the Mies van der Rohe Pavilion, Barcelona, in 2012.