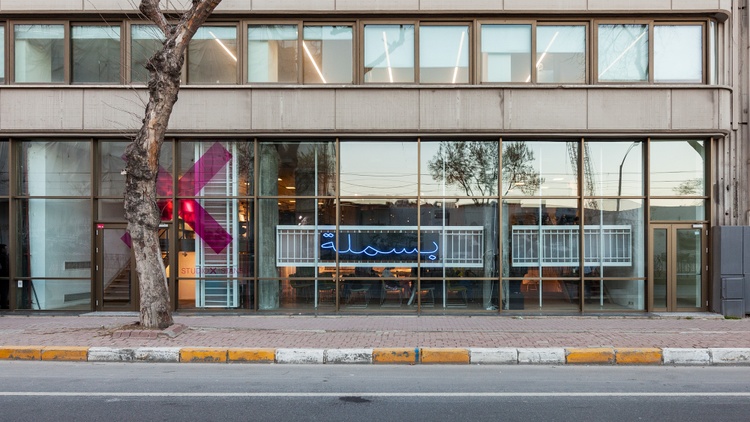 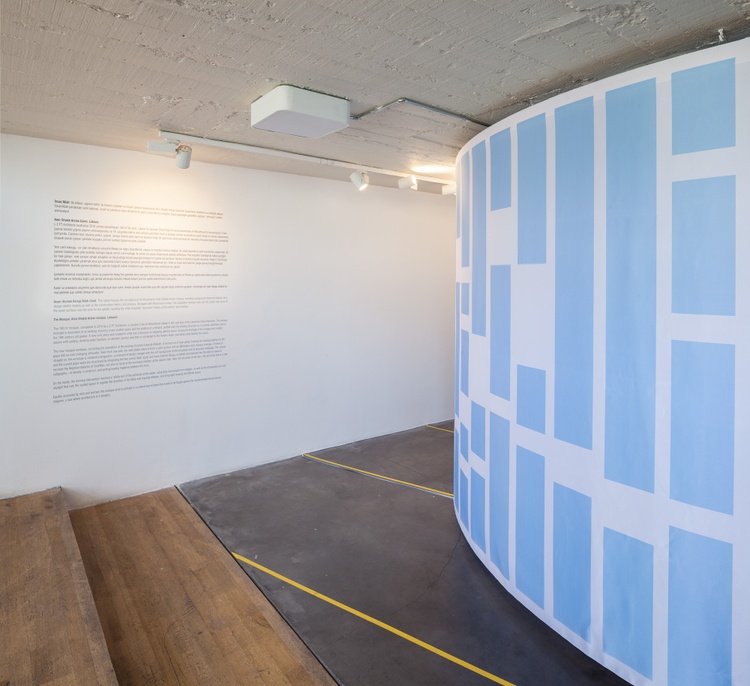 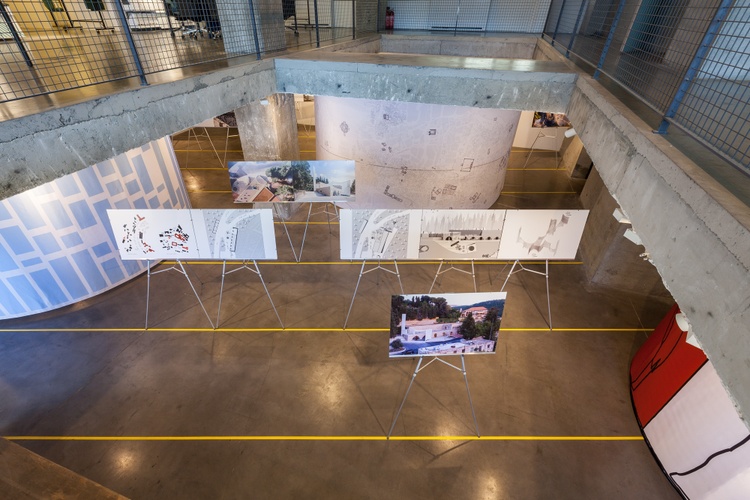 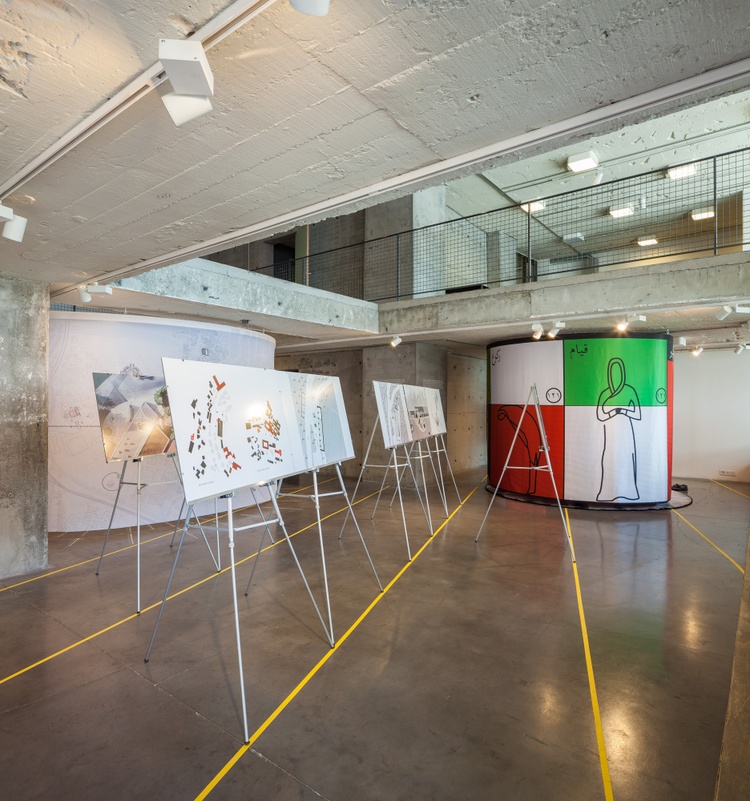 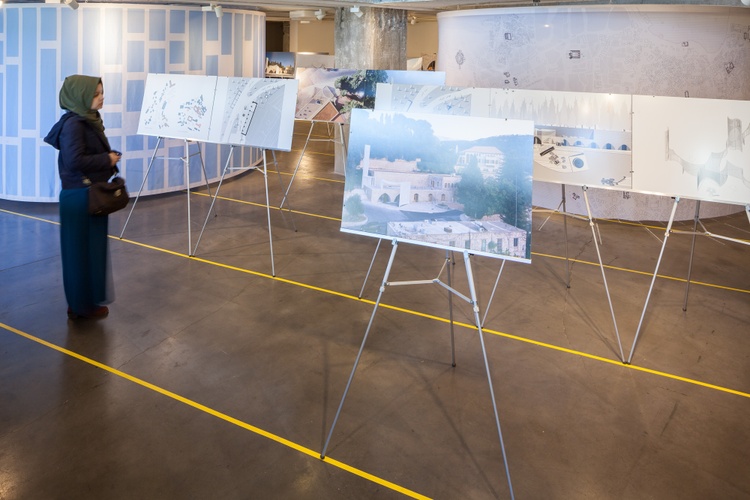 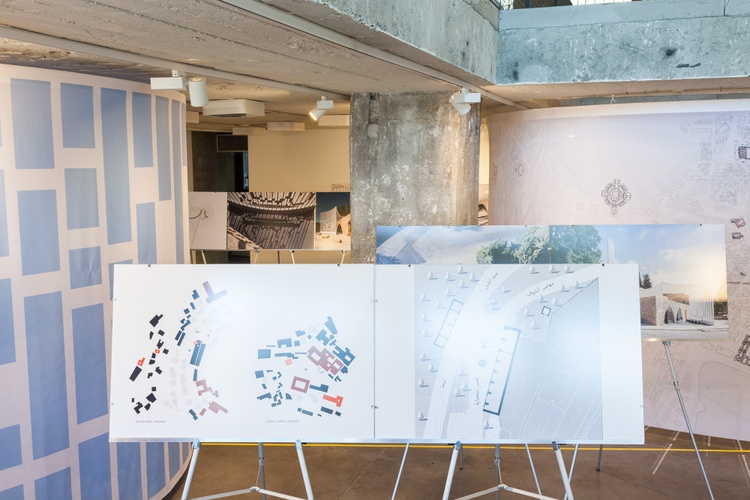 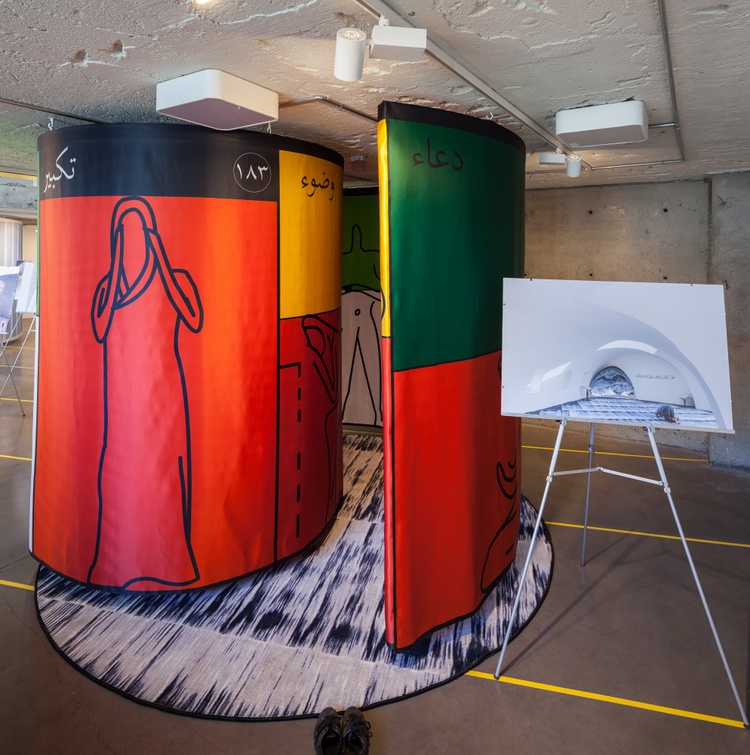 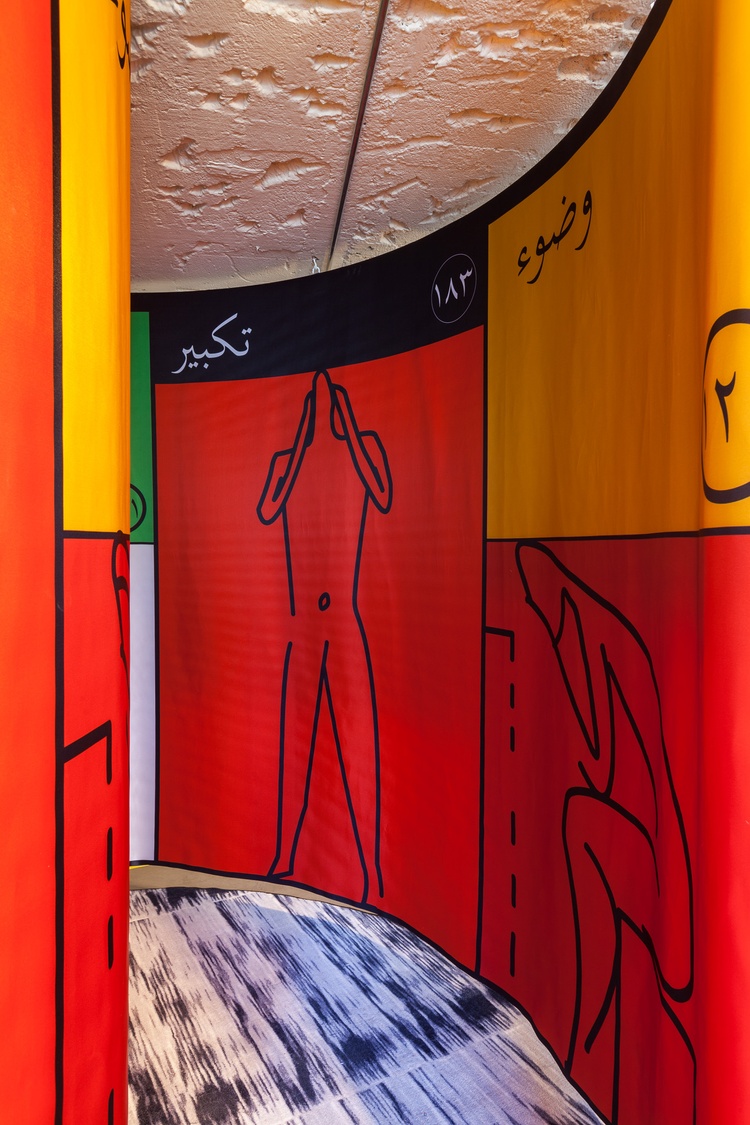 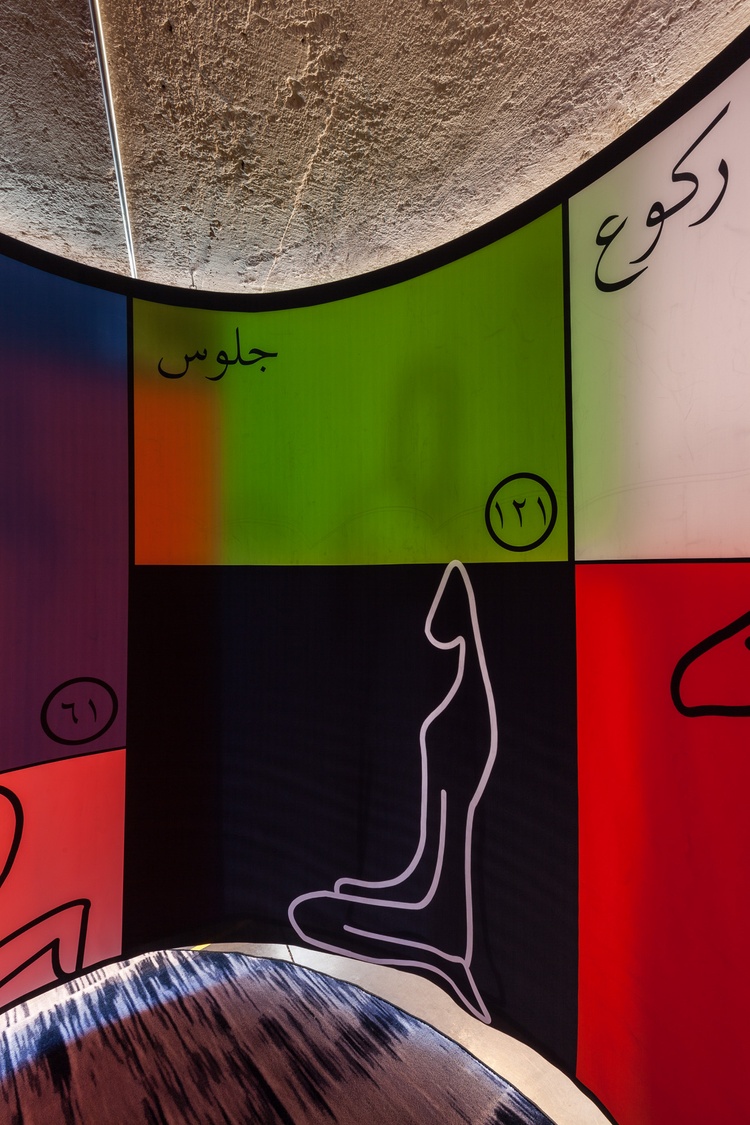 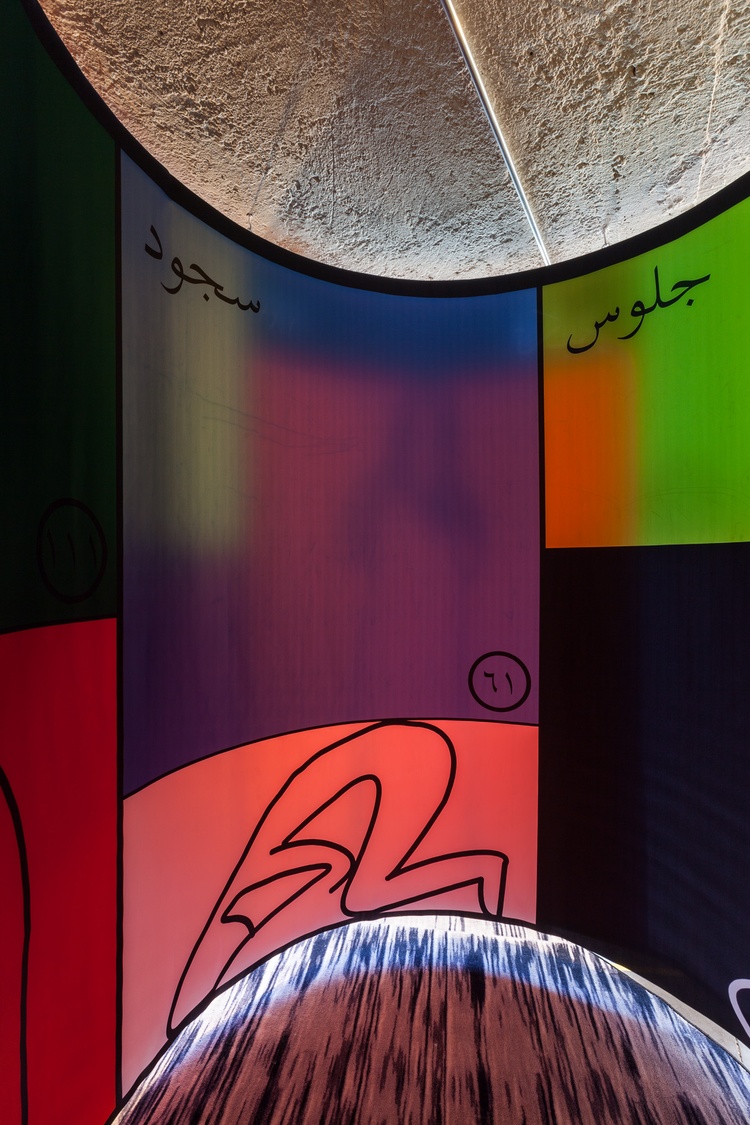 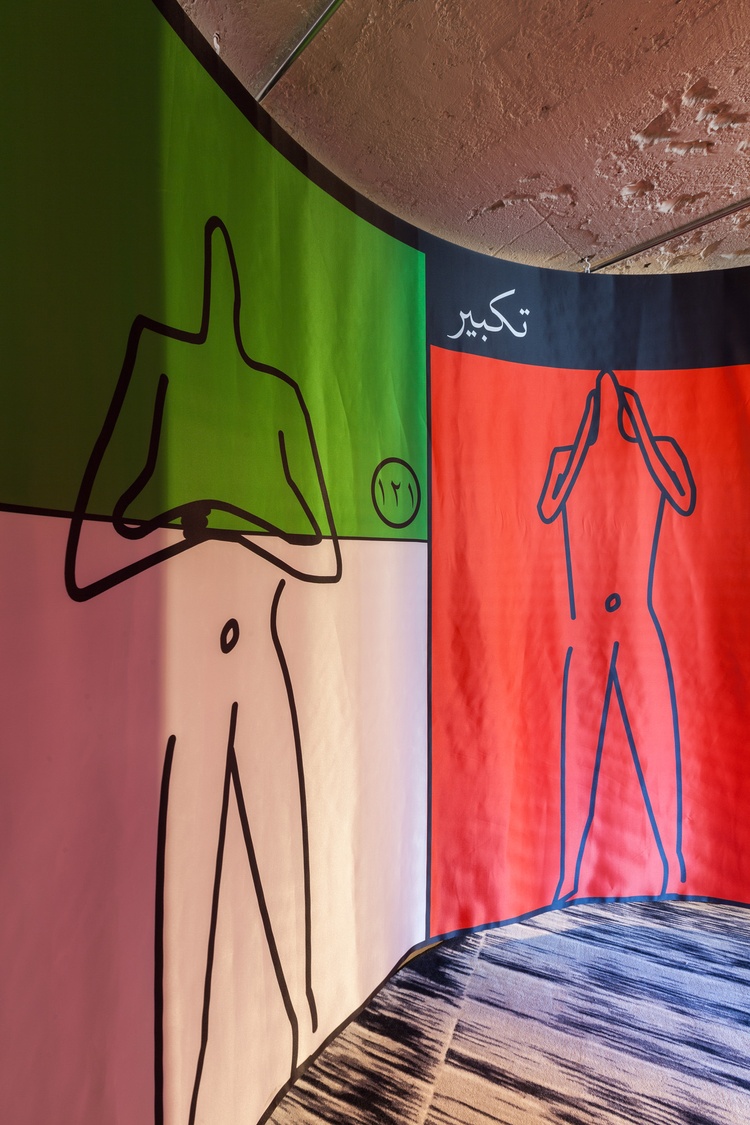 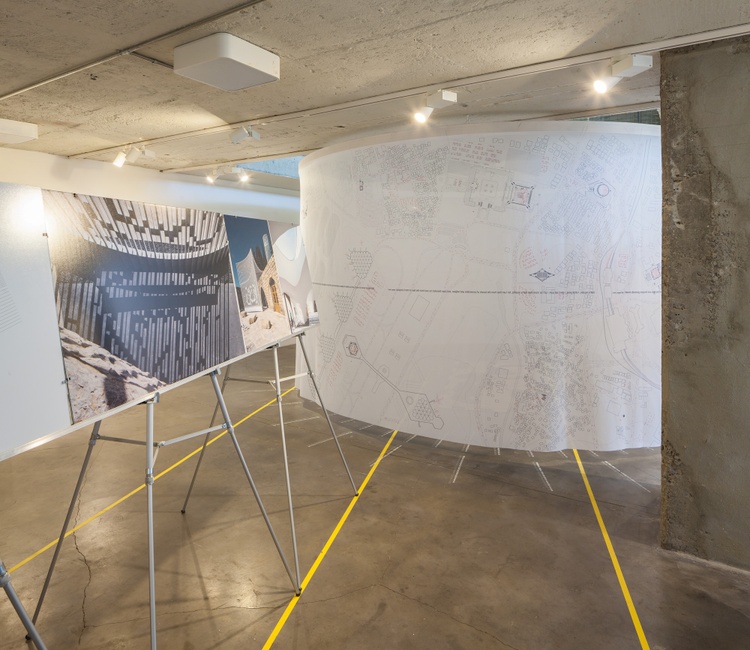 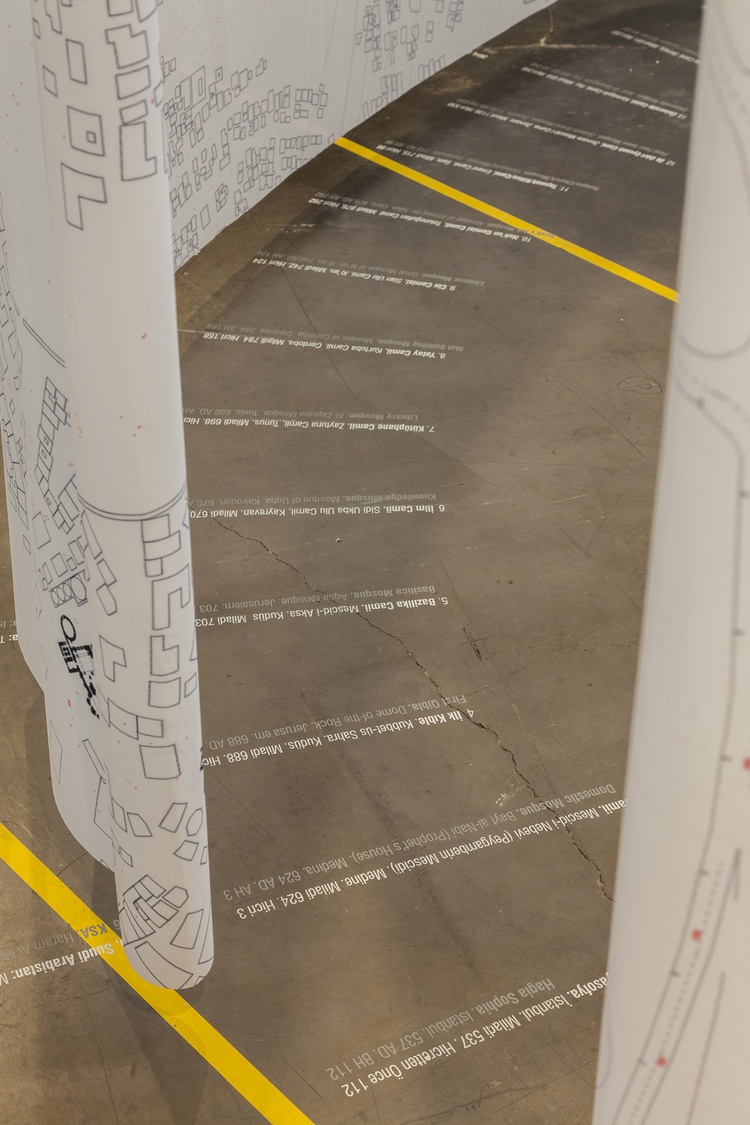 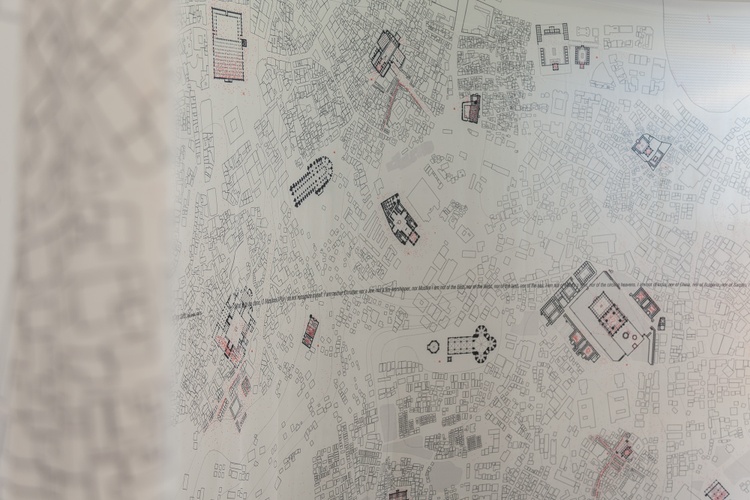 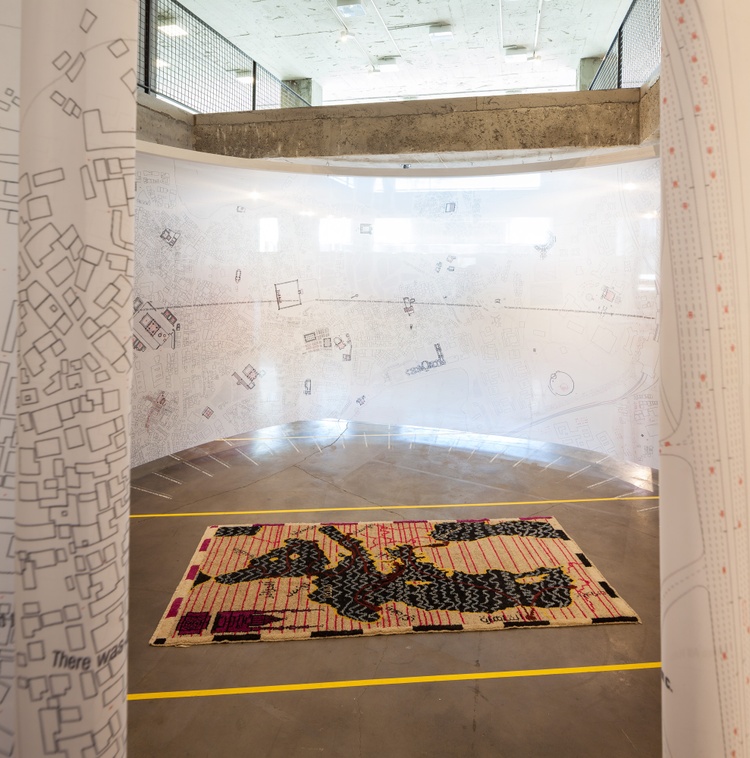 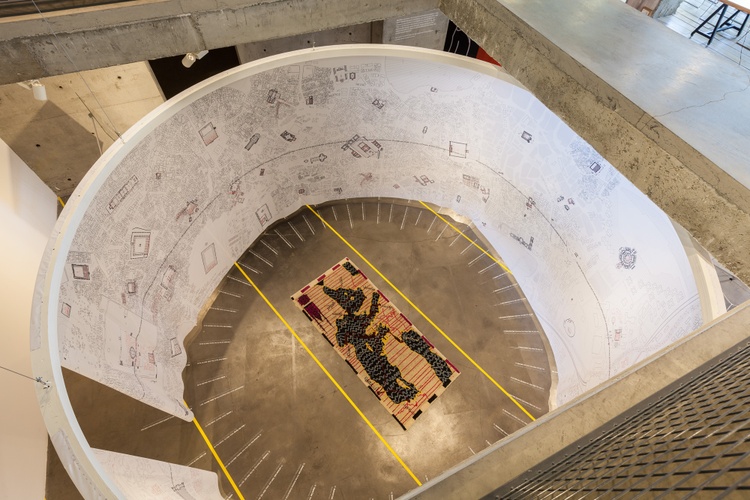 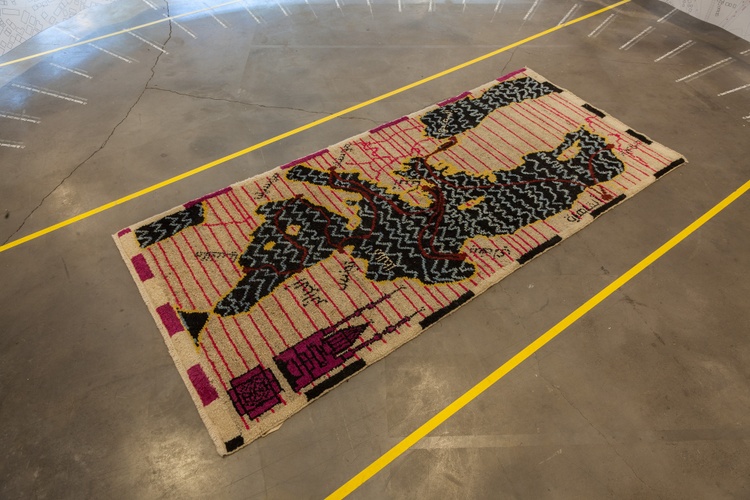 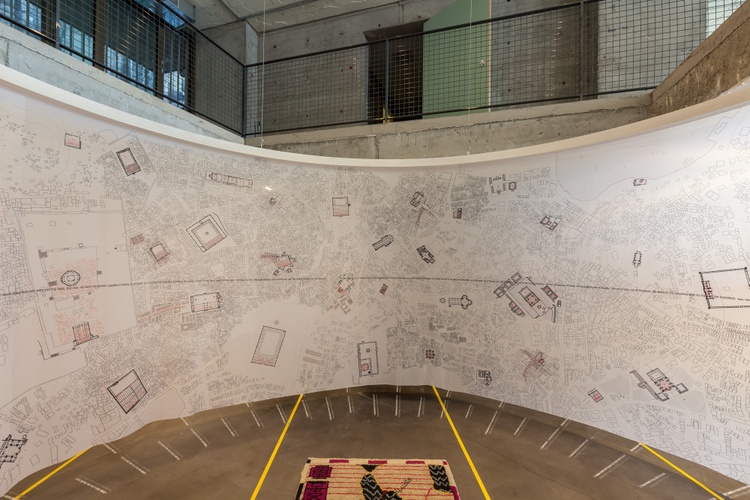 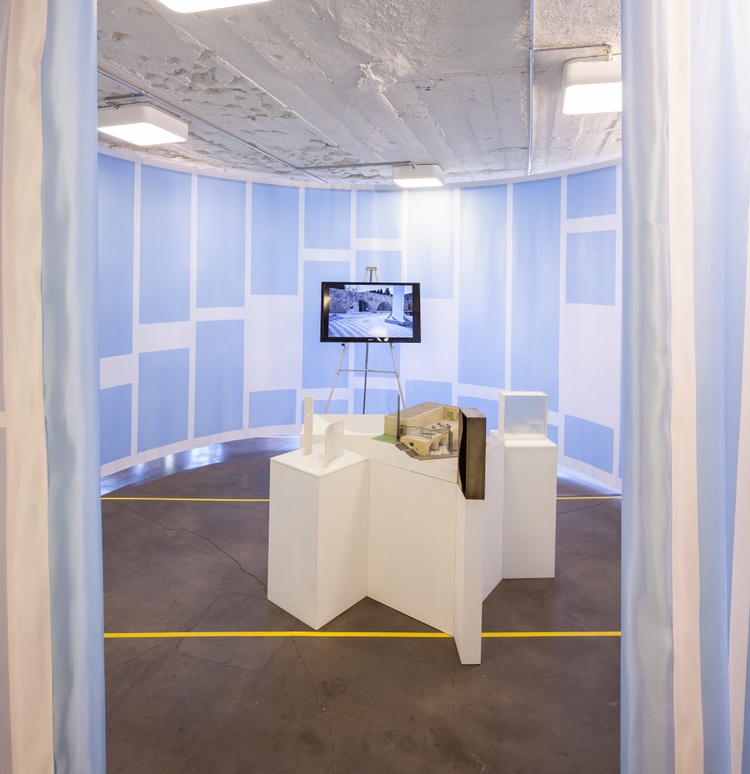 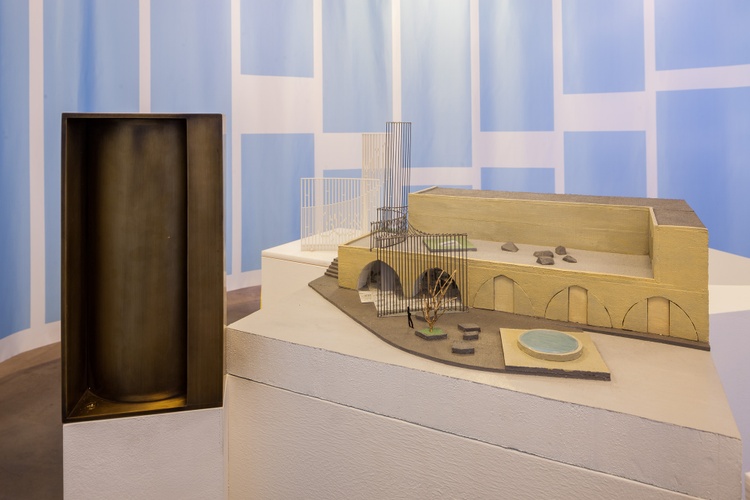 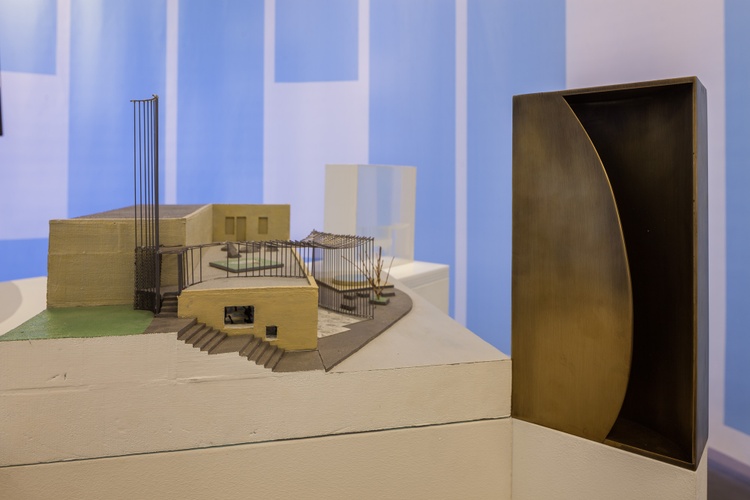 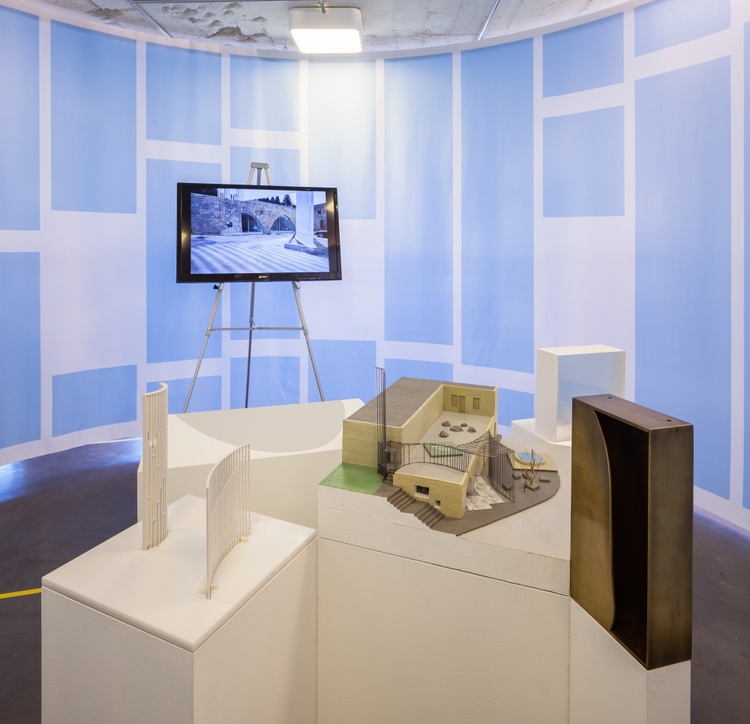 The 100 m2 mosque, completed in 2016 by L.E.FT Architects, is located in the Al-Moukhtarah village in the rural area of the Lebanese Shouf Mountain. The mosque included a renovation of an existing masonry cross-vaulted space and the addition of a minaret, grafted onto the existing structure as a symbolic landmark, next to the 18th century old palace. A new civic plaza was created in what was previously an adjoining parking space, turning the frontage of the mosque into a public square with seating, drinking water fountain, an ablution service area that is connected to the historic water cascading canal feeding the palace.

The new mosque envelope, correcting the orientation of the existing structure towards Makkah, is formed out of steel plates, framing the existing building and the plaza into an ever changing silhouette. Seen from one side, the steel plates stack to form a solid surface with an affirmative clear mosque envelope. If looked at straight on, the envelope is rendered transparent—a moment of doubt, merged with the rich background of the old palace and its terracing landscape. The minaret and the curved plaza walls are structured by integrating the two words Allah (God) and Insan (Human Being); bi-folded and pixelated into the steel armature to recreate the Hegelian dialectic of God/Man, but also to recall of the humanist tradition of the Islamic faith. Here, the structure of the text—the structural text as a new calligraphy—is literally a construct, and writing/reading that happens between the lines.

On the inside, the minimal intervention involved a ‘white-out’ of the surfaces of the vaults, using lime mix brought from Aleppo, as well as the introduction of a new skylight that cuts the vaulted space to register the direction of the Quiblah wall towards Makkah, and bring light towards the Mihrab space. Equally accessed by man and woman, the mosque aims to partake in a cultural war of ideas that needs to be fought against the fundamentalist forces across religions, a war where architecture is a weapon.

Introduced by Basmala expression, a glowing scripture facing the street, the exhibit space is organized around three pieces. Each piece is shrouded with its own dialectic: Insan (Human Being)/Allah (God), Man/Woman, Construction/Destruction; applied on the surface of the curtain enclosures. In between the three intimately defined spaces are rows of drawings and photographic documentation of the Amir Shakib Arslan mosque. All parts are engulfed in the sound of the call to prayer, re-composed here and re-interpreted as a variation on the normative call to prayer by having it spoken rather than sung.

Basmala: Basmala is the act of reciting the phrase Bismillah ‘in the name of God’; a phrase that is usually proclaimed by a Muslim before performing any action. The exhibit is grounded first in this mental faculty, the act of reciting instead of the recited phrase itself, as an intellectual critical exercise when seeking to understand the architectural history of the mosque.

The aspiration of the exhibit is to challenge the pre-deterministic notion of that history upheld by religious extremists (and their ‘Orientalist’ counterpart), who want to us to believe in a fixed notion of a singular Islamic cultural landscape.

Insan/Allah: This space houses the conception of Al-Moukhtarah Amir Shakib Arslan mosque, including background historical material, early design sketch models as well as the construction history and process. Wrapped with Allah/Insan curtain, this opposition between man and his creator (two faces of the same surface) sets the tone for the exhibit, recalling the often forgotten ‘humanist’ history of the Islamic faith tradition.

Man/Woman: This spiraling curtain is a performative piece, housing an intimate space for conducting prayer with a specially designed praying rug, surfaced with a ‘mystical’ visualization of the sound waves taken from Koranic recording. The space is wrapped by a man/woman version of the Modulor figure marking the proportions and metrics of ablution and praying postures. With equal representation for both genders, the Corbusier universal modern man concept is expanded here to represent believers and nonbelievers alike.

Construction/Destruction: This timeline (represented in a map form) is an exhaustive yet incomplete map of 1,400 years of mosque plans, contextualizing this hybrid typology and expanding its repertoire to include lesser known structures (from the rural areas to the modern period). The aim is to demonstrate the evolution of the mosque plan across civilizations and geographies, erasing along the way the East-West divide—what is assumed to be ‘Islamic’ and ‘non-Islamic’, or the purely Islamic (fundamentalist) architecture and culture. The map curtain is transparent, which could be looked at outside-in, and wrapped by an inverse/ complementary chronological history of mosque destructions in the 20th Century.