Ware Lounge
Free and open to the public.

When Ivory Towers Were Black (Fordham University Press, 2016) tells the untold story of how an unparalleled cohort of ethnic minority students earned degrees from Columbia GSAPP during the Civil Rights Movement. The panel will discuss the role of the university in communities and disruptions as potential catalysts for transformational change in academia and society.

The book follows two university units that steered the school toward an emancipatory approach to education, in particular, the school’s Urban Planning Program, revealing fierce struggles to open the ivory tower to ethnic minority students and to involve them, and their revolutionary white peers, in improving Harlem’s slum conditions. It tracks the unraveling of this groundbreaking experiment as white lash against reforms wrought by civil rights legislation grew. Through its first-person portrayal of how a transformative process got reversed, When Ivory Towers Were Black can catalyze contemporary struggles for equality as crushing race- and place-based injustices multiply and historically marginalized students remain excluded from the elite city-making professions.

Dr. Sharon E. Sutton, FAIA is Professor Emerita of Architecture and Founding Director of CEEDS (Center for Environment, Education, and Design Studies) at the University of Washington. She has been an architecture educator since 1975, having held positions at Pratt Institute, Columbia University, the University of Cincinnati, and the University of Michigan where she became the first African American woman in the United States to be promoted to full professor of architecture. The author of numerous books, book chapters, reports, and articles, Sutton’s research focuses on youth, community, and social justice, including the career development of minority populations. Sutton has lectured at more than 40 colleges and universities internationally, in community settings, and at professional conferences in art, architecture, interior design, landscape architecture, planning, and psychology. Formerly a Kellogg National Fellow as well as a Danforth Fellow, Sutton has degrees in music, architecture, psychology, and philosophy, all earned in New York City. She is a Fellow in the American Institute of Architects, a Distinguished Professor of the Association of Collegiate Schools of Architecture, and an inductee in the Michigan Women’s Hall of Fame.

Reinhold Martin is Professor of Architecture and Director of The Temple Hoyne Buell Center for the Study of American Architecture at Columbia GSAPP. He is a member of Columbia’s Institute for Comparative Literature and Society as well as the Committee on Global Thought. Martin is a founding co-editor of the journal Grey Room and has published widely on the history and theory of modern and contemporary architecture. He is the author of The Organizational Complex: Architecture, Media, and Corporate Space (MIT Press, 2003), and Utopia’s Ghost: Architecture and Postmodernism, Again (Minnesota, 2010). His work centers on histories of space, power, and the aesthetic imagination, particularly as mediated by technical infrastructures. Related areas of research include architecture and epistemology, globalization and cities, and media history.

Senator Bill Perkins, Democrat—Working Families, was elected by the people to the New York State Senate in November 2006. Senator Perkins represents the 30th Senatorial District which is part of New York County and encompasses Harlem, the great preponderance of East Harlem, the Upper West Side, Morning Heights and Washington Heights. A lifelong resident of Harlem, Bill Perkins started his political career as a community activist and is known for his tenacious and unyielding commitment to serving the community. The young, elderly and the most vulnerable New Yorkers have always been Bill’s legislative priorities. Prior to his Senate election, Senator Perkins served on the New York City Council. During his eight-year tenure, he was the third highest ranking member of the Council serving as the Deputy Majority Leader. As Deputy Majority Leader, Senator Perkins was the prime sponsor of the Childhood Lead Paint Poisoning Prevention Act of 2004 which protects children from the deadly effects of lead paint in their homes. Thanks to his efforts, New York has the strongest lead paint prevention law in the country. A strong advocate of public education, Bill Perkins has fought to provide every child equal access to a quality education.

Mabel O. Wilson is an Associate Professor and teaches architectural design and history/theory courses at Columbia GSAPP. She is also appointed as a Senior Fellow at the Institute for Research in African-American Studies and co-directs Global Africa Lab. Her design and scholarly research investigates space, politics and cultural memory in black America; race and modern architecture; new technologies and the social production of space; and visual culture in contemporary art, film and new media.

Ware Lounge
Free and open to the public.

Columbia GSAPP Associate Professor Mabel O. Wilson (‘91 M.Arch) speaks with Sharon Sutton ('73 M.Arch) about the publication of her new book, When Ivory Towers Were Black, which tells the story of how an unparalleled cohort of ethnic minority students earned degrees from Columbia University’s School of Architecture during a time of fierce struggles to open the ivory tower to ethnic minority students. 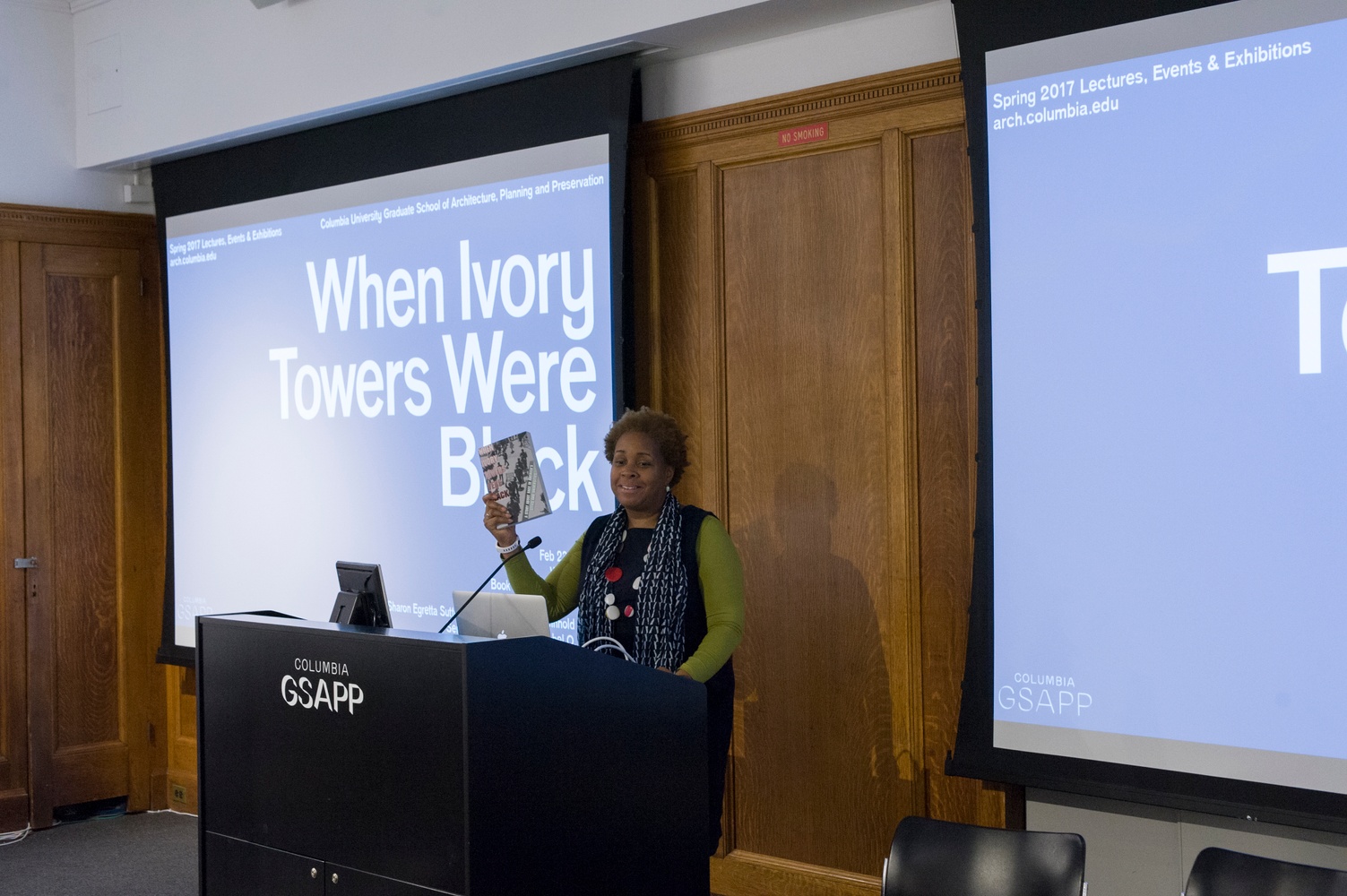 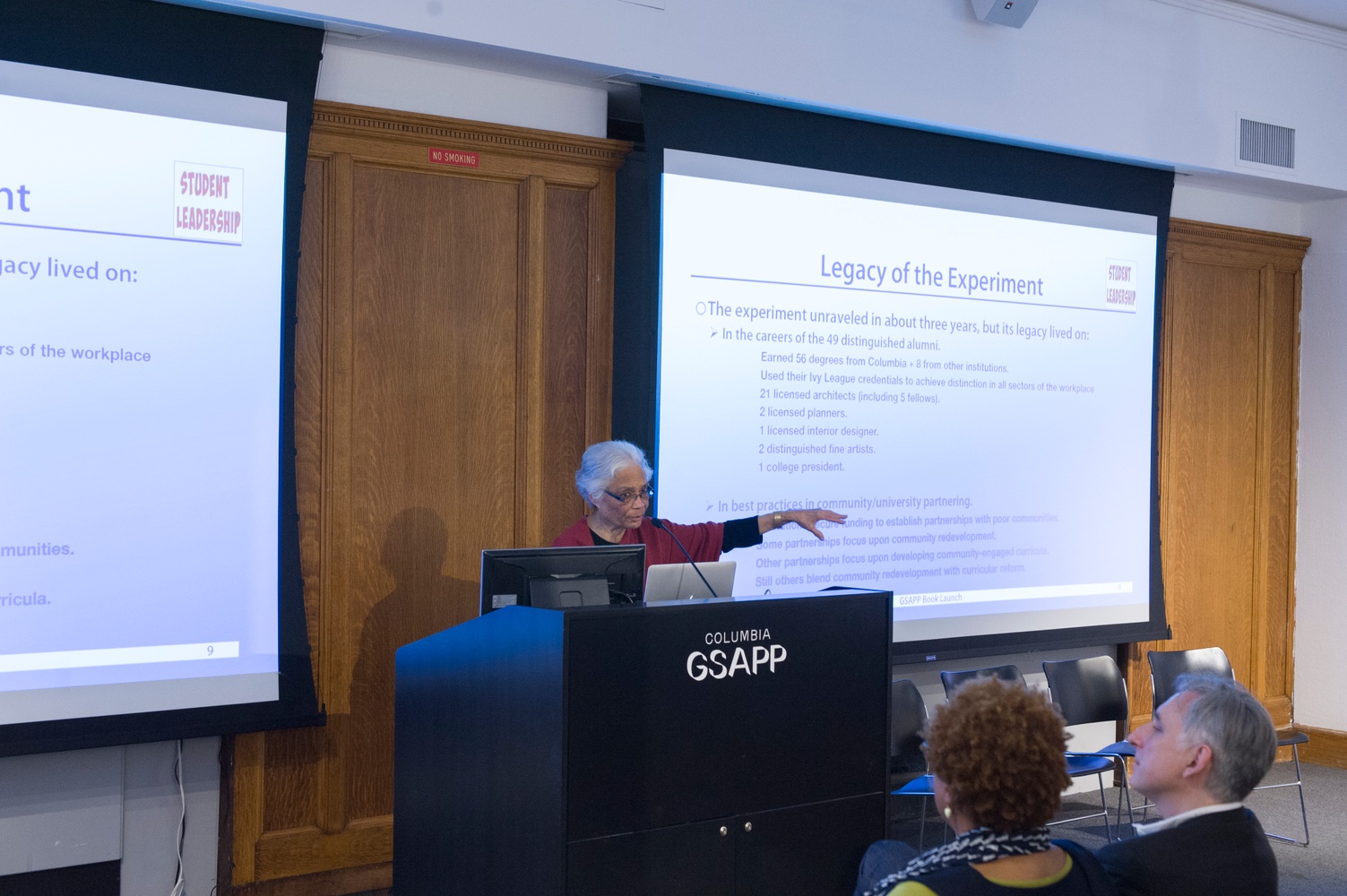 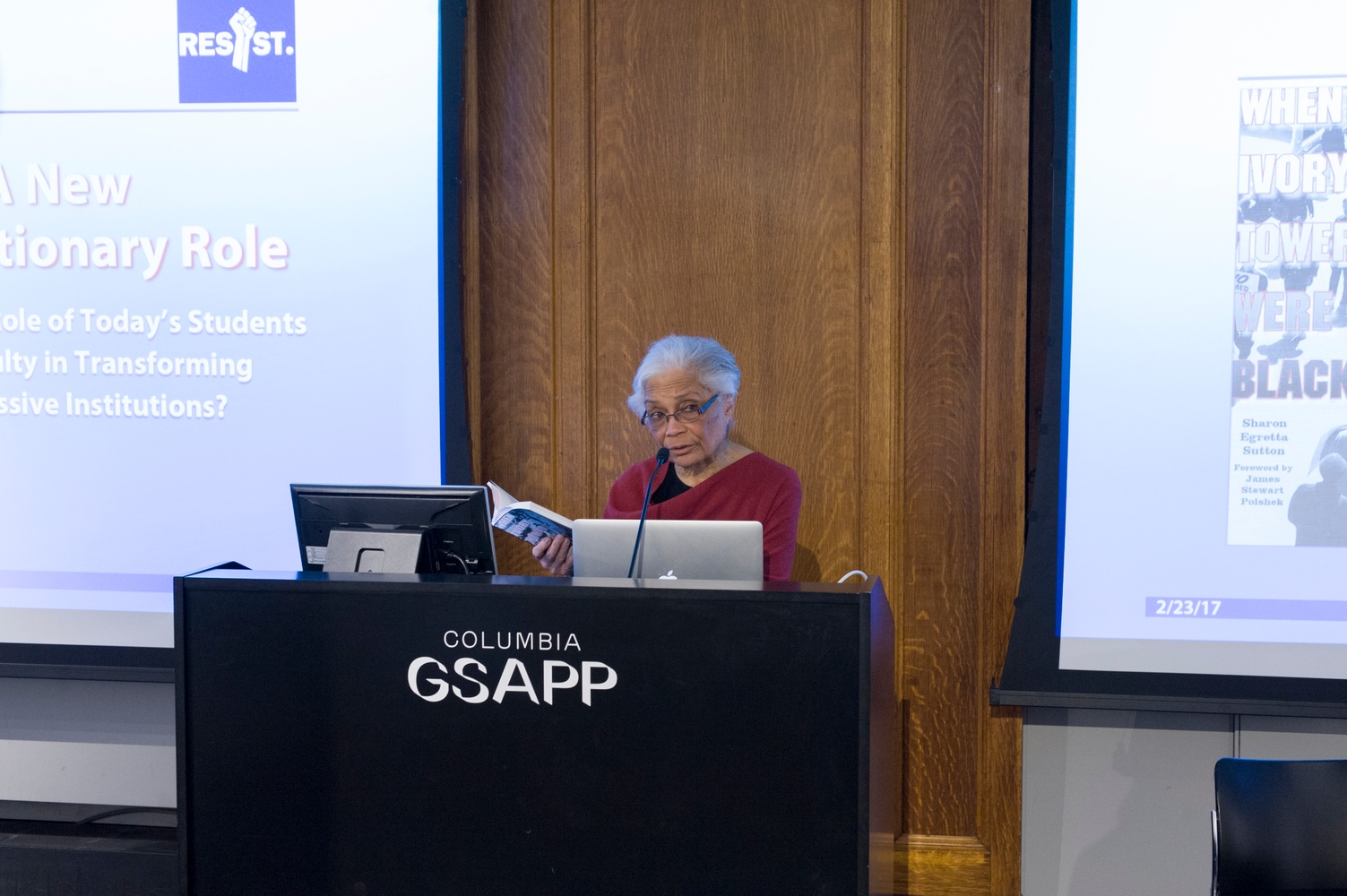 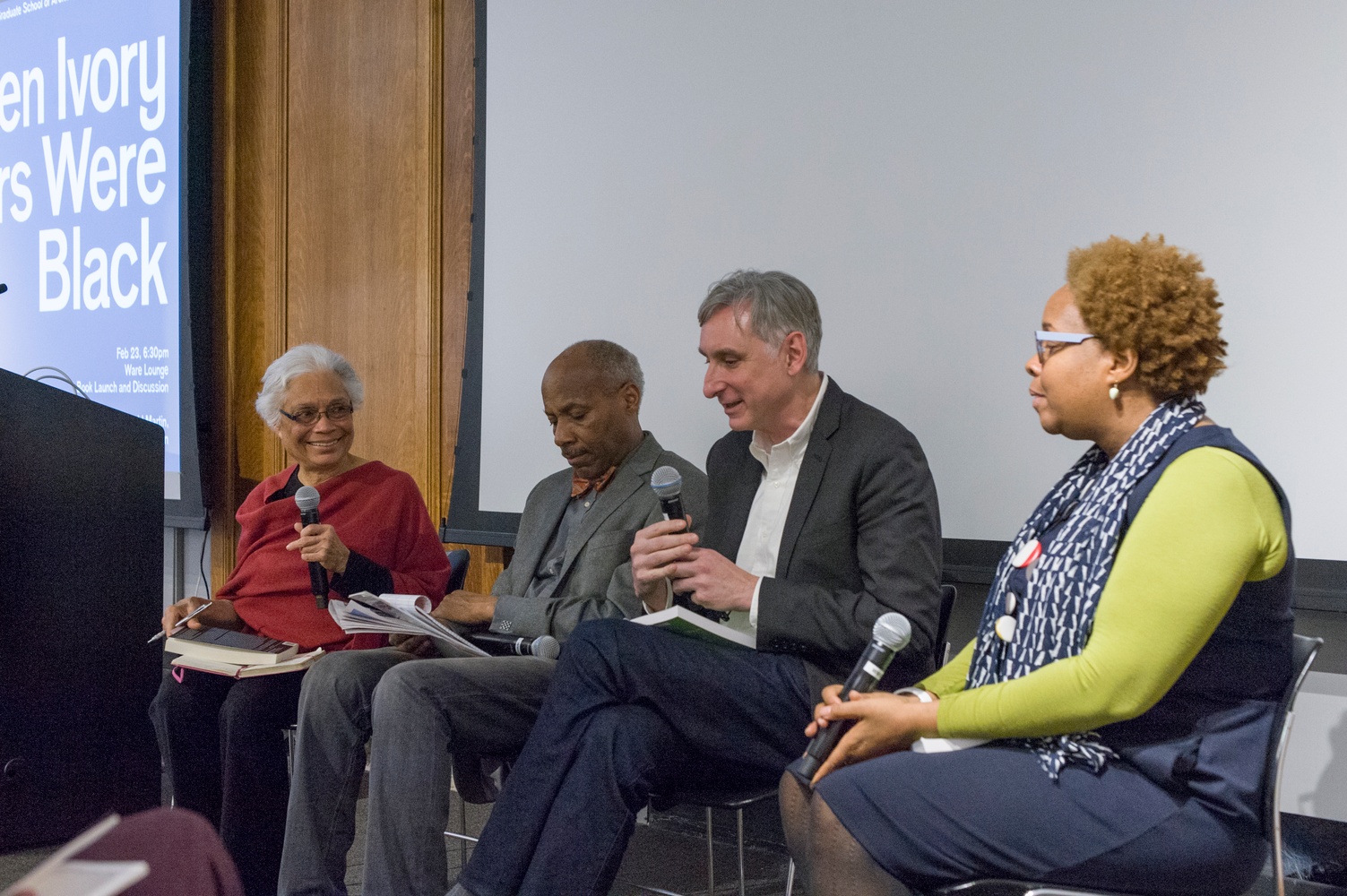 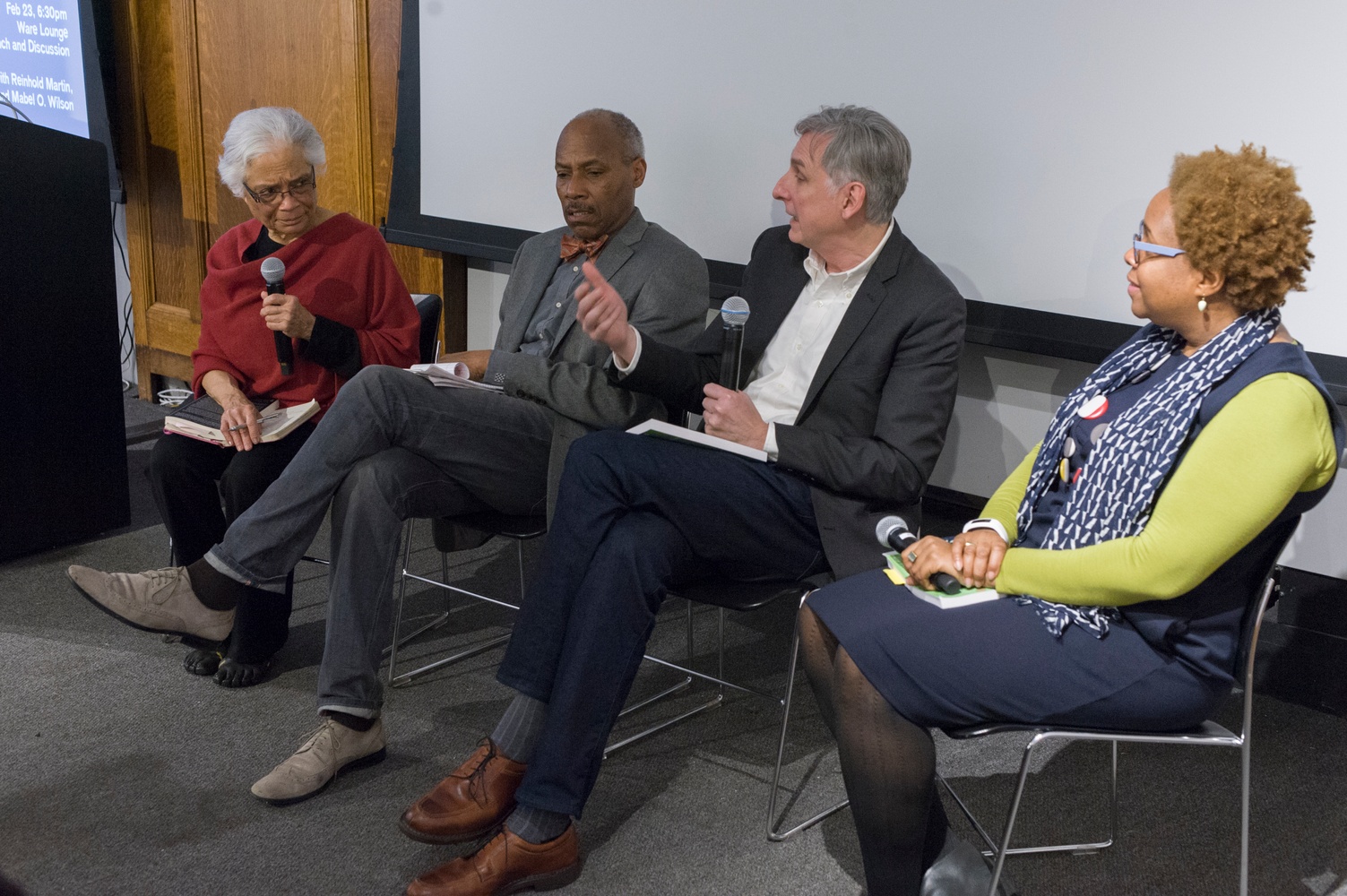