Stanford University Press’ For the War Yet to Come: Planning Beirut’s Frontiers is the forthcoming book by Assistant Professor of Urban Planning Hiba Bou Akar.

Beirut is a city divided. Following the Green Line of the civil war, dividing the Christian east and the Muslim west, today hundreds of such lines dissect the city. For the residents of Beirut, urban planning could hold promise: a new spatial order could bring a peaceful future. But with unclear state structures and outsourced public processes, urban planning has instead become a contest between religious-political organizations and profit-seeking developers. Neighborhoods reproduce poverty, displacement, and urban violence.

For the War Yet to Come examines urban planning in three neighborhoods of Beirut’s southeastern peripheries, revealing how these areas have been developed into frontiers of a continuing sectarian order. Bou Akar argues these neighborhoods are arranged, not in the expectation of a bright future, but according to the logic of “the war yet to come”: urban planning plays on fears and differences, rumors of war, and paramilitary strategies to organize everyday life. As she shows, war in times of peace is not fought with tanks, artillery, and rifles, but involves a more mundane territorial contest for land and apartment sales, zoning and planning regulations, and infrastructure projects.

Brinkley Messick is Professor of Anthropology and of Middle Eastern, South Asian and African Studies at Columbia University. He was the Chair of the Department of Anthropology from 2004-2011; was a founding co-Director of the Center for Palestine Studies (2010-15); and currently is the Director of the Middle East Institute. In 2009, he received the Outstanding Senior Scholar Award from the Middle East Section of the American Anthropological Association. He specializes in the anthropology of law, legal history, written culture, and the circulation and interpretation of Islamic law and is the author of The Calligraphic State, which won the Albert Hourani Award from the Middle East Studies Association. His most recently published book is Shariʿa Scripts: A Historical Anthropology (2018).

Hiba Bou Akar received her Ph.D. in City and Regional Planning with a designated emphasis in Global Metropolitan Studies from the University of California at Berkeley. She holds a Bachelor of Architecture from the American University of Beirut (AUB) and Master in Urban Studies and Planning from the Massachusetts Institute of Technology (MIT).

Bou Akar’s research examines the geographies of planning and war; the question of urban security and violence, focusing on the role of religious political organizations in the making of cities. Her forthcoming book, For the War Yet to Come: Planning Beirut’s Peripheries examines how Beirut’s post-civil war peripheries have been transformed through multiple planning exercises into contested frontiers that are mired in new forms of conflict. It contributes to planning thought by studying planning practice within a framework of past and anticipated violence. Her first co-edited book, Narrating Beirut from its Borderlines, incorporated ethnographic and archival research with art installations, architecture, graphic design, and photography to explore Beirut’s segregated geographies. Bou Akar’s research has been supported by the National Science Foundation (NSF), the Social Science Research Council (SSRC), the Wenner- Gren Foundation, and the Arab Council for the Social Sciences (ACSS). Her work was also supported by a postdoctoral fellowship at the Mahindra Humanities Center at Harvard University.

Faranak Miraftab’s interdisciplinary research empirically based in Latin America, Southern Africa, Middle East and North America, draws on feminist, transnational and urban scholarship. Her research and teaching concerns the global and local development processes involved in the formation of cities and citizens’ struggles to access dignified urban livelihood. She is author of Women’s Empowerment: Participation in Shelter Strategies at the Community Level in Urban Informal Settlements and editor (with David Wilson and Ken Salo) of Cities and Inequalities in a Global and Neoliberal World, (with Neema Kudva) Cities of the Global South Reader, and (with Victoria A. Beard and Chris Silver) Planning and Decentralization: Contested Spaces for Public Action in the Global South.

Timothy Mitchell is a political theorist and historian. His areas of research include the place of colonialism in the making of modernity, the material and technical politics of the Middle East, and the role of economics and other forms of expert knowledge in the government of collective life. Much of his current work is concerned with ways of thinking about politics that allow material and technical things more weight than they are given in conventional political theory. Educated at Queens’ College, Cambridge, where he received a first-class honours degree in History, Mitchell completed his Ph.D. in Politics and Near Eastern Studies at Princeton University in 1984. He joined Columbia University in 2008 after teaching for twenty-five years at New York University, where he served as Director of the Center for Near Eastern Studies. At Columbia he teaches courses on the history and politics of the Middle East, colonialism, and the politics of technical things. He contributed the essay ‘The Capital City’ to the publication The Arab City: Architecture and Representation, ed. Amale Andraos and Nora Akawi. Columbia Books on Architecture and the City, 2016. His most recent book is Carbon Democracy: Political Power in the Age of Oil (Verso Press, 2012).

M. Christine Boyer is an urban historian whose interests include the history of the city, city planning, preservation planning, and computer science. Before joining Princeton, she was professor and chair of the City and Regional Planning Program at Pratt Institute and she has taught at Cooper Union, Columbia University and Harvard University. Boyer received an award from the Department of Art and Archaeology Publication Fund, for publication of Le Corbusier: homme de letters (1910-1947) (Princeton Architectural Press, 2010). Her publications include Dreaming the Rational City: The Myth of American City Planning 1890-1945 (Cambridge: The MIT Press, 1983), Manhattan Manners: Architecture and Style 1850-1900 (New York: Rizzoli, 1985), The City of Collective Memory (Cambridge: The MIT Press, 1994), CyberCities (New York: Princeton Architectural Press, 1996), and Not Quite Architecture: Writing around Alison and Peter Smithson (MIT Press, 2017).

Amale Andraos has taught at numerous universities including the Princeton University School of Architecture, the Harvard Graduate School of Design, the University of Pennsylvania Design School and the American University in Beirut. Her recent design studios and seminar have focused on the Arab City, which has become the subject of a series of symposia entitled “Architecture and Representation” held at Studio-X Amman in 2013 and at the university’s New York campus in the Fall of 2014. Her publications include the recent WORKac: We’ll Get There When We Cross That Bridge (Monacelli Press, 2017); 49 Cities, a re-reading of 49 visionary plans through an ecological lens; Above the Pavement, the Farm! (Princeton Architectural Press, 2010); and The Arab City: Architecture and Representation (Columbia Books on Architecture and the City, 2016). Andraos is a co-founder of WORKac, a 35-person architectural firm based in New York that focuses on architectural projects which re-invent the relationship between urban and natural environments.

Free and open to the public. Books available for sale.
Organized by Columbia GSAPP in collaboration with the Middle East Institute, Columbia University.

Hiba Bou Akar
For The War Yet To Come: Planning Beirut’s Frontiers 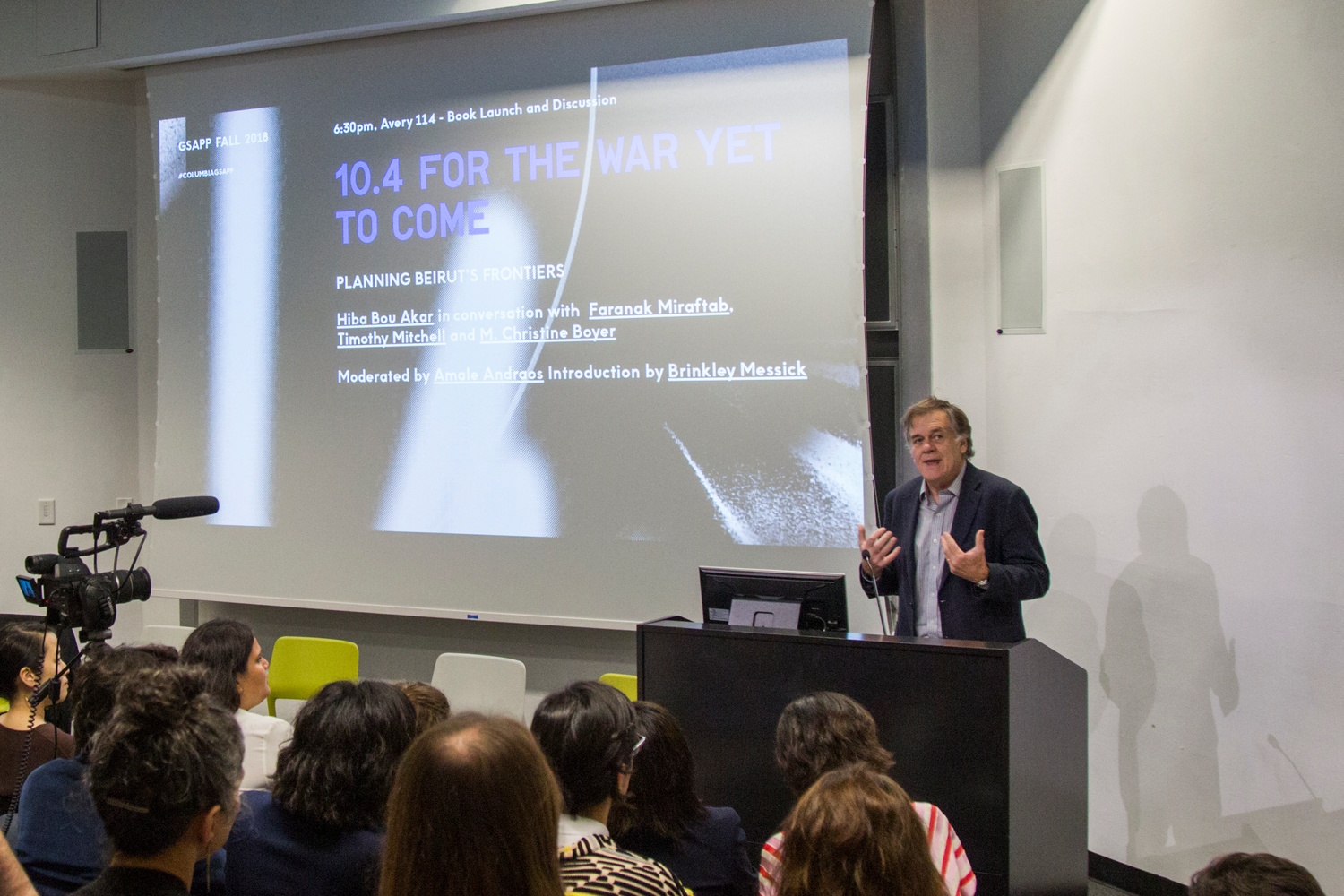 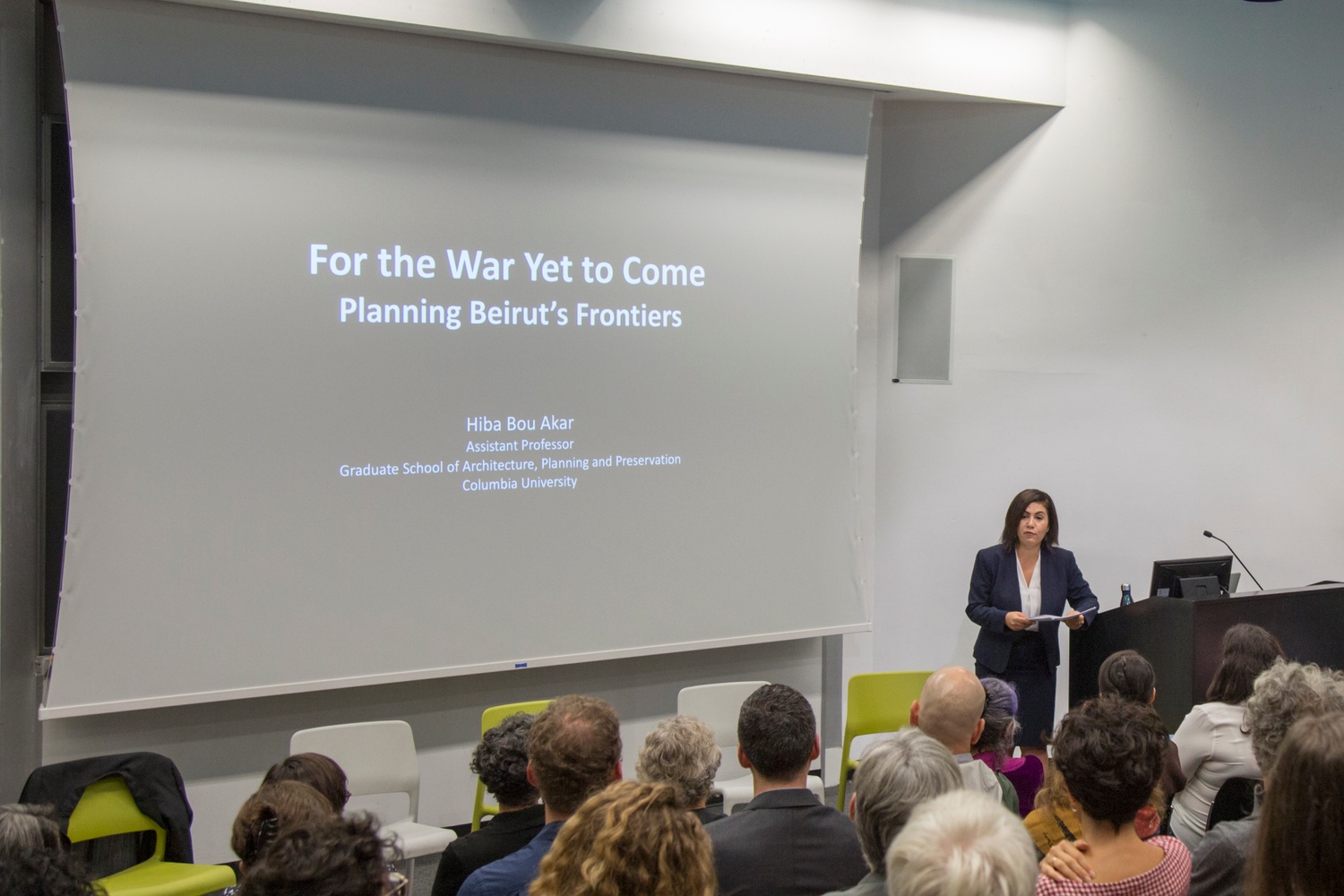 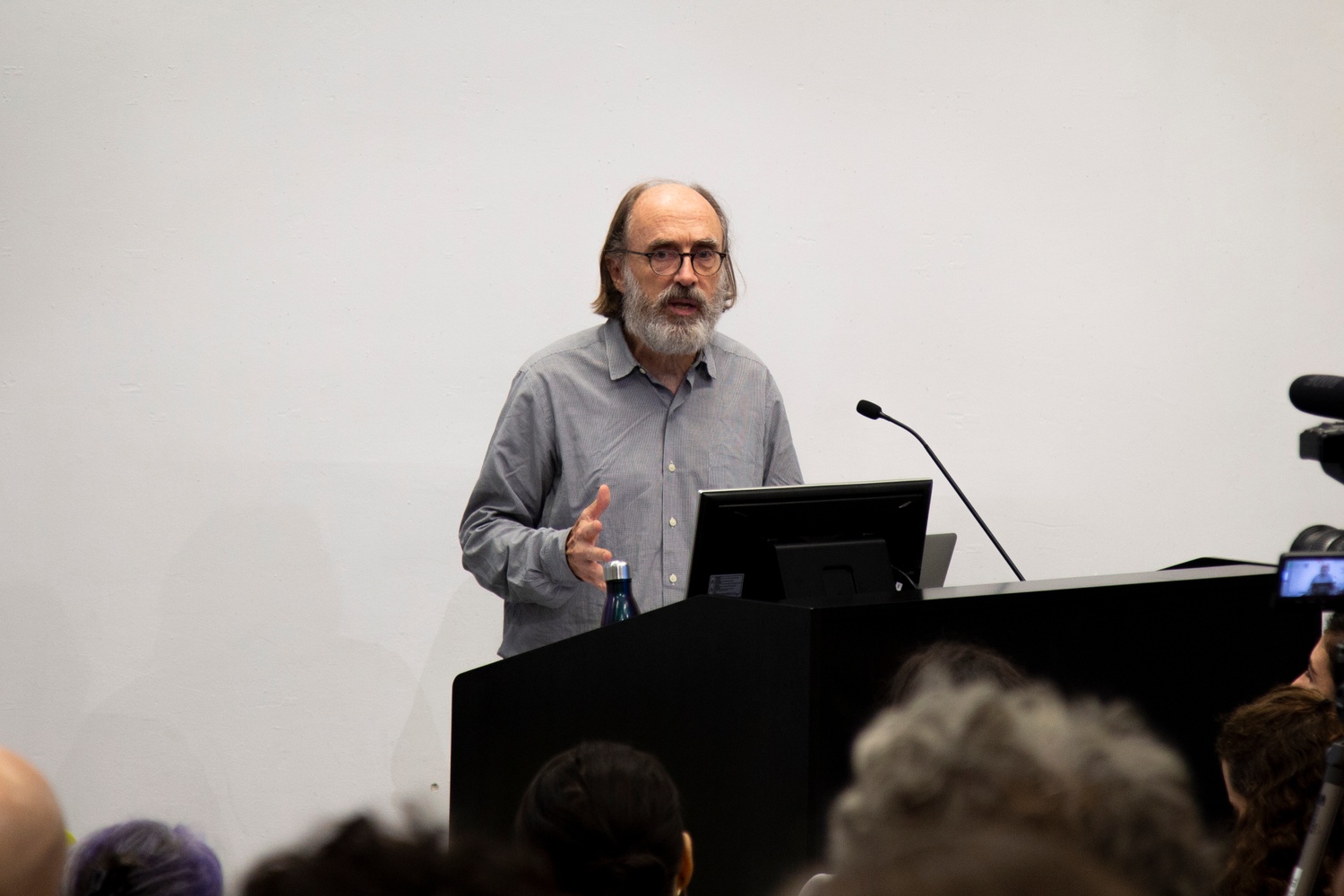 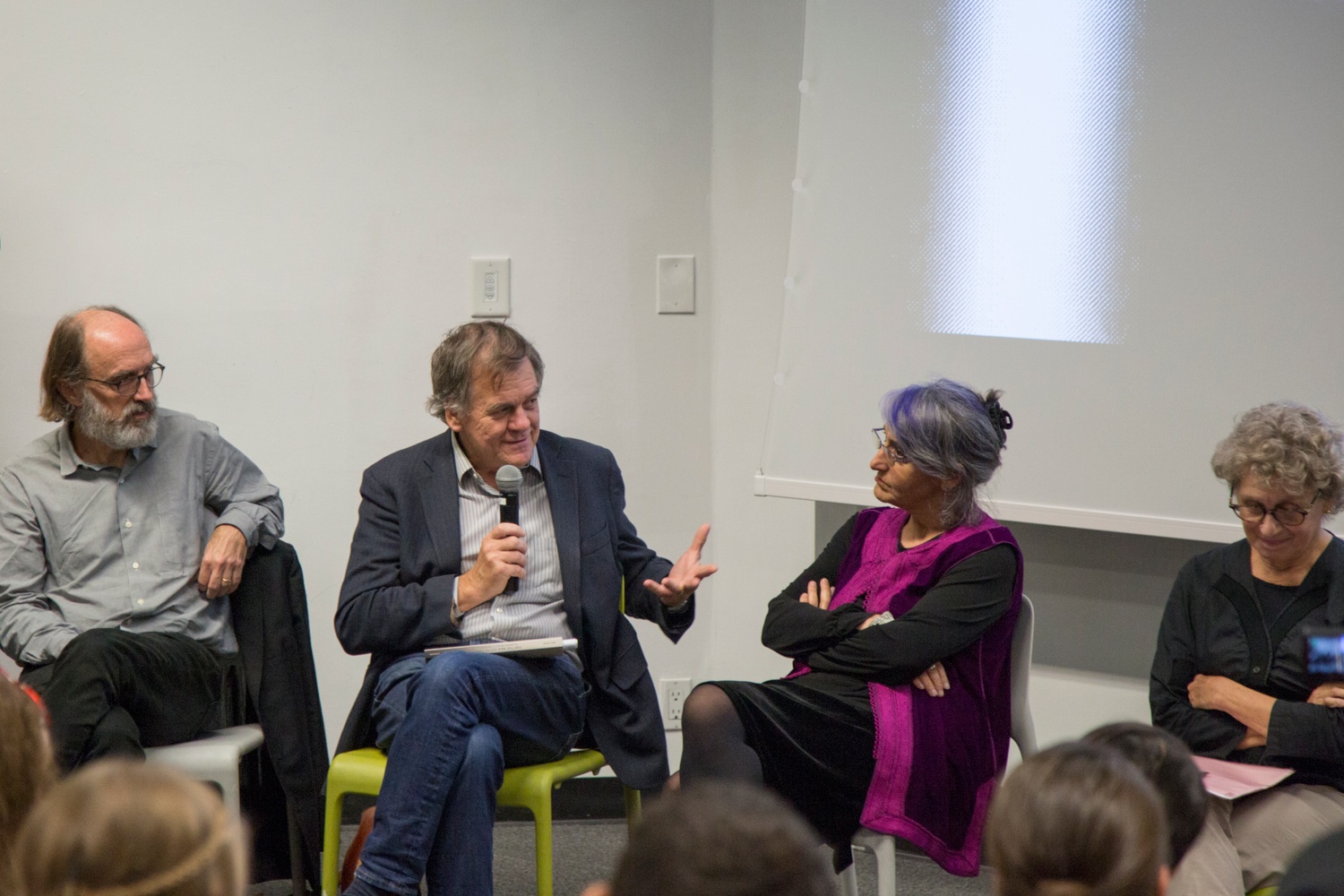 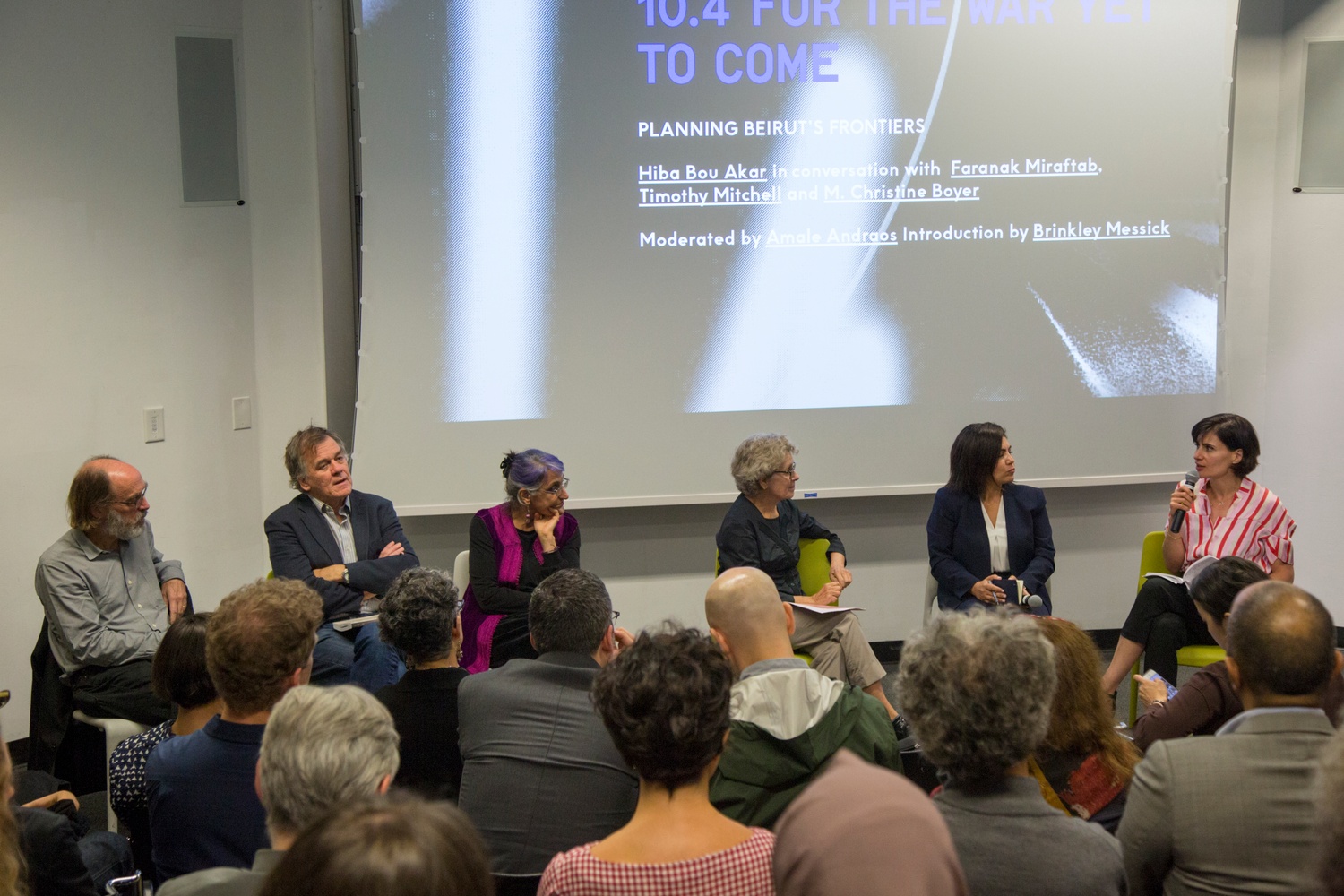