Unnatural Disaster:
Infrastructure in Puerto Rico before, during, and after Hurricane Maria

In January of 2018, four months after Hurricane Maria devastated the island, Puerto Rico’s Governor Ricardo Rosselló announced a plan to privatize the US territory’s publicly owned power utility (PREPA). This action—exposing infrastructure at the convergence of colonialism, finance, and 150 mile-per-hour winds—came as no surprise to those who have been paying attention. Nonetheless, its implications are sure to be felt well beyond the thousands of residents who remained without power months after Hurricane Maria made landfall.

Rosselló’s more recent push to commence privatization of the island’s public school system emphatically echoes and underscores these facts. While many fields are involved in addressing the current crisis on the island, we believe a more focused, historically informed conversation on the roles of architecture, planning, and preservation in both the production and management of these ever-more-frequent emergencies—especially as they pertain to infrastructure—is warranted.

Co-organized by Columbia GSAPP Urban Planning, Urban Design, and Historic Preservation Programs, the Center for Spatial Research, and the Temple Hoyne Buell Center for the Study of American Architecture, in conjunction with the Buell Center’s “Power: Infrastructure in America” research initiative, which considers infrastructural systems and processes as sites of sociotechnical and ecological governmentality at the intersection of neoliberalism and nationalism.

Hiba Bou Akar is an Assistant Professor at Columbia GSAPP. Her recent book, For the War Yet to Come: Planning Beirut’s Frontiers (Stanford University Press, 2018), examines how Beirut’s post-civil war peripheries have been transformed through multiple planning exercises into contested frontiers that are mired in new forms of conflict. Bou Akar received her Ph.D. from the University of California at Berkeley. She holds a Bachelor of Architecture from the American University of Beirut (AUB) and a Master in City Planning from the Massachusetts Institute of Technology (MIT).

Ivis Garcia Zambrana is an Assistant Professor in City and Metropolitan Planning at the University of Utah. She has spent time as a professional planner in Albuquerque, New Mexico, San Francisco, California, Springfield, Missouri, Washington, D.C., and Chicago, where she was co-chair of the city’s largest Puerto Rican organization—the Puerto Rican Agenda. She is currently writing a book on Puerto Ricans in Chicago which is under contract with CENTRO Press. Dr. Garcia also chairs Planners for Puerto Rico—a group of academic and practitioner planners from ACSP, APA, FEMA, CENTRO, UPR, and Society for Puerto Rican planners—among others that are collaborating in recovery efforts in Puerto Rico after Hurricane Maria. She was recently elected a board member of the National Puerto Rican Agenda which is a nonpartisan alliance to address Puerto Rico’s humanitarian crisis and promote Puerto Rican political and civic participation in the United States. She earned her Ph.D. in Urban Planning and Policy from the University of Illinois at Chicago. She holds dual master’s degrees from the University of New Mexico in Community and Regional Planning and Latin American Studies and a bachelor’s in Environmental Sciences from Inter-American University in Puerto Rico.

Monxo López is a researcher, professor, cartographer, and South Bronx–based environmental and urban justice activist. He teaches Latino and ethnic politics at Hunter College, and is a Mapping Fellow at the Design Trust for Public Spaces. Monxo is also a founding member of South Bronx Unite (a local urban and environmental justice organization), and founding member and board member of the Mott Haven/Port Morris Community Land Stewards, the local Community Land Trust. He holds a Ph.D. in political science from CUNY’s Graduate Center, and an MA from Université Laval in Québec, Canada. His academic research revolves around spatiality, mapping, social justice, political theory, and Latino communities. López’s political writings on spatial and social justice have been published in Salon, LatinoRebels, and NACLA, among other media outlets; and his activist work has been profiled by The New York Times, UrbanOmnibus, and Corriere della Sera. He was born and grew up in Puerto Rico, and currently lives in Mott Haven, the South Bronx.

Marcelo López-Dinardi is an immigrant, researcher and educator interested in the various scales of design, in the practice of architecture as research, and the intersection of architecture and political economy. He is an Assistant Professor of architecture at Texas A&M University. As Partner of A(n) Office was selected to represent the United States Pavilion in the 2016 Venice Architecture Biennale and later selected as a Fellow for Ideas City Athens and Arles, and event organized by New York City’s New Museum. Has written for Avery Review, The Architect’s Newspaper, Entorno, Domus, Planning Perspectives, Art Forum China, and lectured at Cooper Union, Princeton University, RISD among others. He completed a Bachelor in Architecture from the Polytechnic University of Puerto Rico (2003) and a MS in Critical, Curatorial and Conceptual Practices of architecture (2013) at Columbia GSAPP.

Mark Martin Bras is the Director of Community Relations and Research at the Vieques Conservation and Historical Trust and the Co-founder of ViequesLove, both are nonprofits working in Vieques. His research focuses on bioluminescent bays for the VCHT and cetaceans and sea turtles with the Wise laboratory. After Maria, Martin took a leadership role on the emergency response and recovery, by connecting outside resources and local entities to provide solutions. He became a facilitator and coordinator for the complex response system providing logistics, resources, translation and coordination for government and private entities. He is an EPA Environmental Champion recipient, a member of the board of Sociants, and the President of the board of BiblioCeiba, an educational foundation.

Andrés Mignucci, FAIA is a Puerto Rican architect, urbanist, and educator. He is the recipient of the National Architecture Prize in Architecture, a Fellow of the American Institute of Architects, and a Henry Klumb Award Laureate. His recent publications include Conversations with Form, Supports: Housing and City, and Bruno Stagno: An Architecture for the Tropics. Mignucci has been selected as a Rockefeller Foundation Arts & Literary Arts Fellow and 2019 scholar-in-residence at the Bellagio Center developing a research project entitled COMMON GROUND: PUBLIC SPACE AND THE RESILIENT CITY. Mignucci teaches at the School of Architecture at University of Puerto Rico and is principal of Andrés Mignucci Arquitectos.

Frances Negrón-Muntaner is a filmmaker, writer, curator, scholar, and professor at Columbia University, where she is also the founding curator of the Latino Arts and Activism Archive. Among her books and publications are: Boricua Pop: Puerto Ricans and the Latinization of American Culture (CHOICE Award, 2004), The Latino Media Gap (2014), and Sovereign Acts: Contesting Colonialism in Native Nations and Latinx America (2017). Her most recent films include Small City, Big Change (2013), War for Guam (2015) and Life Outside (2016). For her work as a scholar and filmmaker, Negrón-Muntaner has received Ford, Truman, Rockefeller, and Pew fellowships. In 2008, the United Nations’ Rapid Response Media Mechanism recognized her as a global expert in the areas of mass media and Latin/o American studies; She is also recipient of the Lenfest Award, one of Columbia University’s most prestigious recognitions for excellence in teaching and scholarship (2012) and an inaugural OZY Educator Award (2017). Negrón-Muntaner served as director of Columbia’s Center for the Study of Ethnicity and Race from 2009-2016.

Ingrid Olivo is an Urban Planner and Architect with over 20 years’ experience combining policy and advisory work, research and teaching. She was recently an Associate Researcher for Columbia’s Center for Urban Disaster Risk Reduction and Resilience and an Urban Studies Foundation Post-Doctoral Fellow, and is currently a coordinator within Ecuador’s Sustainable Secondary Cities Programme. Olivo has worked with NGOs, private firms, universities, multinational and public institutions, receiving support from institutions such as the British Council, Fulbright, UNEP-UNESCO, and the Organization of American States. She received her Ph.D. in Urban Planning from Columbia GSAPP.

Free and open to the public.

Hiba Bou Akar
Unnatural Disaster: Infrastructure in Puerto Rico Before, During, and After Hurricane Maria 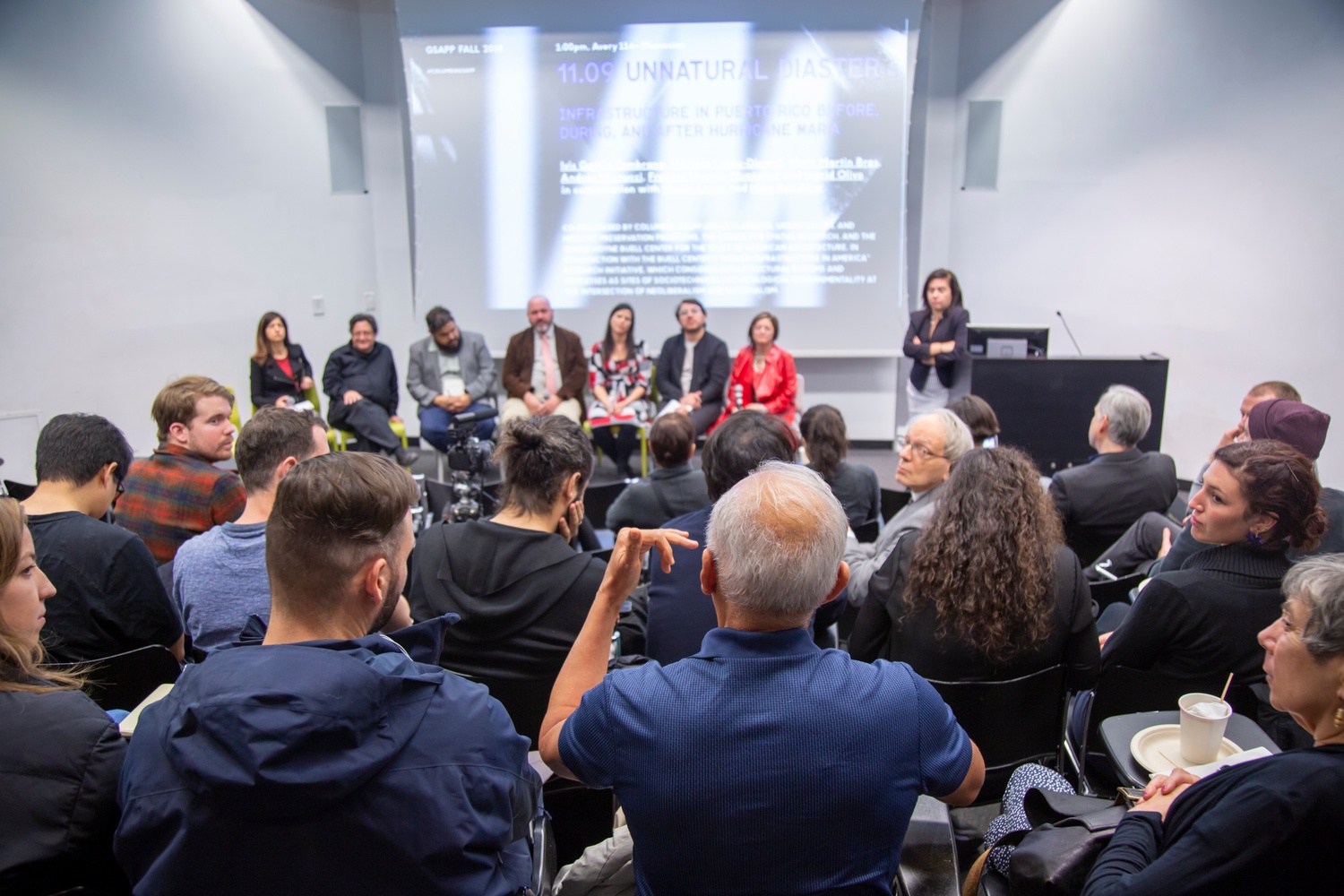 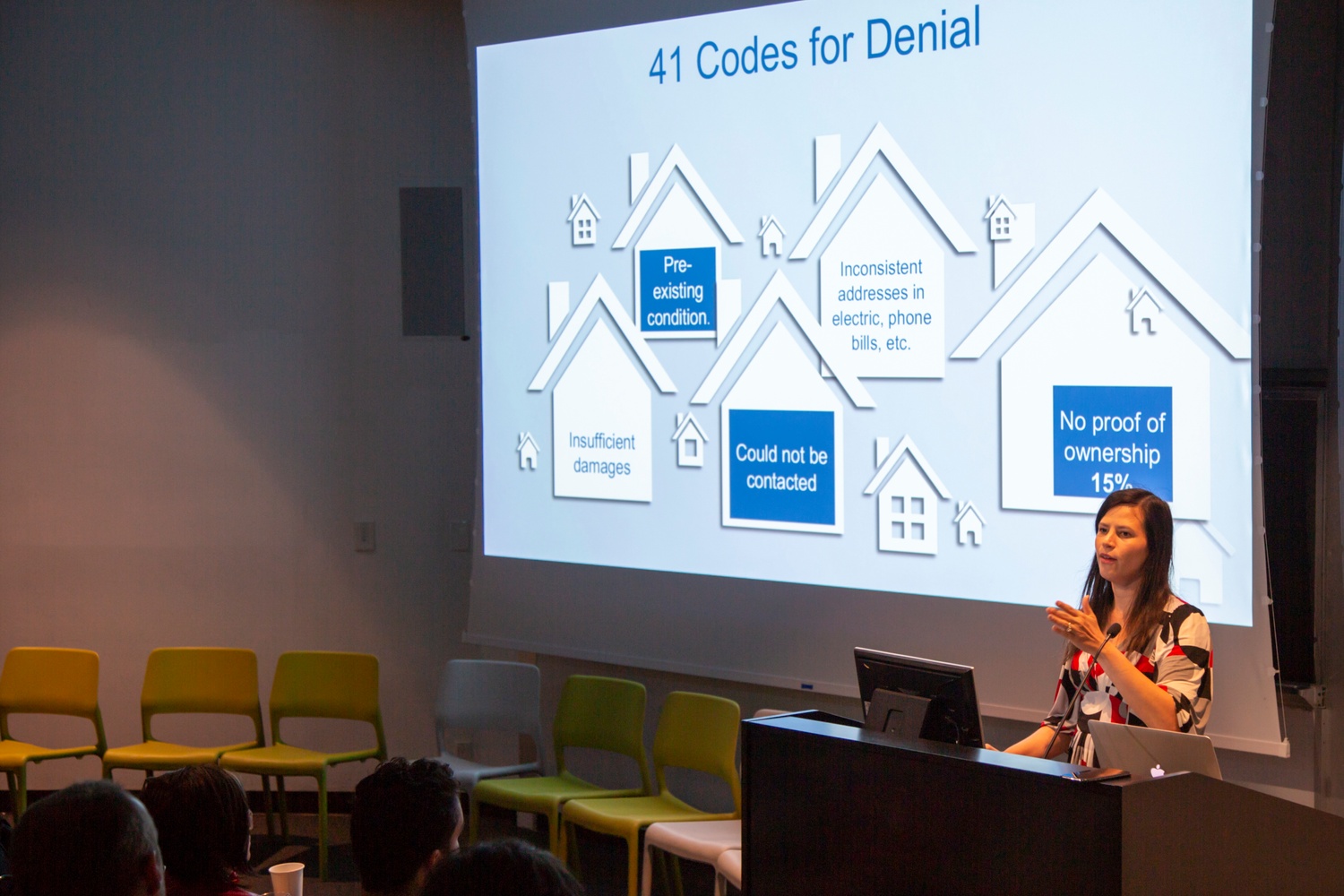 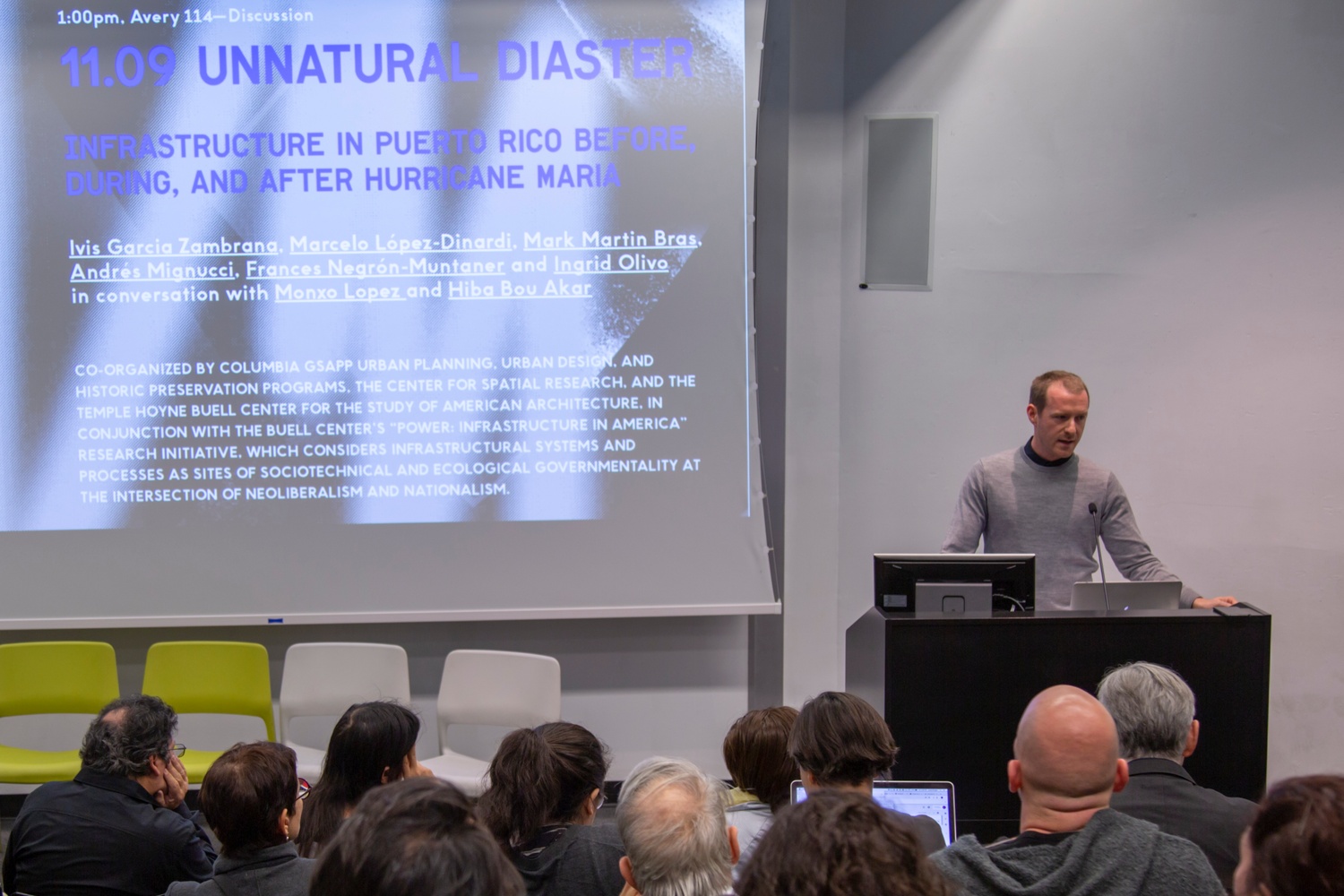