The project mainly focused on three major points to revert the land around Fort Derussy to its intended equilibrium: the water, the view, and the tourism.

The water. By reverting most of Fort Derussy Park into a traditional fish pond system, not only does it tie this aina back to its original culture and program in a decolonial manner, but it is also beneficial for the local environment as it is a natural reservoir. Using the Taro fields upstream and the natural wetland and sand downstream, as well as the removal of the concrete bearing wall by the seashore, the project promotes the revitalization of the traditional ecology of Waikiki.

The view. Waikiki’s boom in tourism led to the development of the Alawai Canal and large numbers of skyscrapers on the original wetlands and fishponds area. When Hawaiians practice their ceremony to the ahupua'a, they normally face the mountains as it provides fresh water, now that connection is mainly blocked by the urban jungle. The only access to this ahupua'a is to go to Sand island, which is by the ocean afar. Military also took over the sacred place such as the punch ball and the diamondhead to use as a military cemetery and “maintain the shoreline defense”. To restore the view to the ahupua'a, two hales on the water are designed to provide the space and view necessary for the local Hawaiian to host ceremonies and worship: one functions as the connection pier and the other one is further down in the ocean on a higher tower and only accessible by boat. These facilities are invitation only.

The Tourism. The tourists who come to Waikiki often come with a certain cultural gaze that was formulated by decades of propaganda. How about turning the geographical center of all of this into a program to reorient the gaze? Eco-tourism can be a possible solution to link tourists and the Hawaiian people. Few gestures on the site are hinting that the tourists are being “monitored” to create the feeling of such gaze they laid upon the local people. Other programs that engage reflections and thoughts of the relationship between the aina and people are also implemented on the site such as the abandoned punched through Luana hotel tower and the reflection chamber. 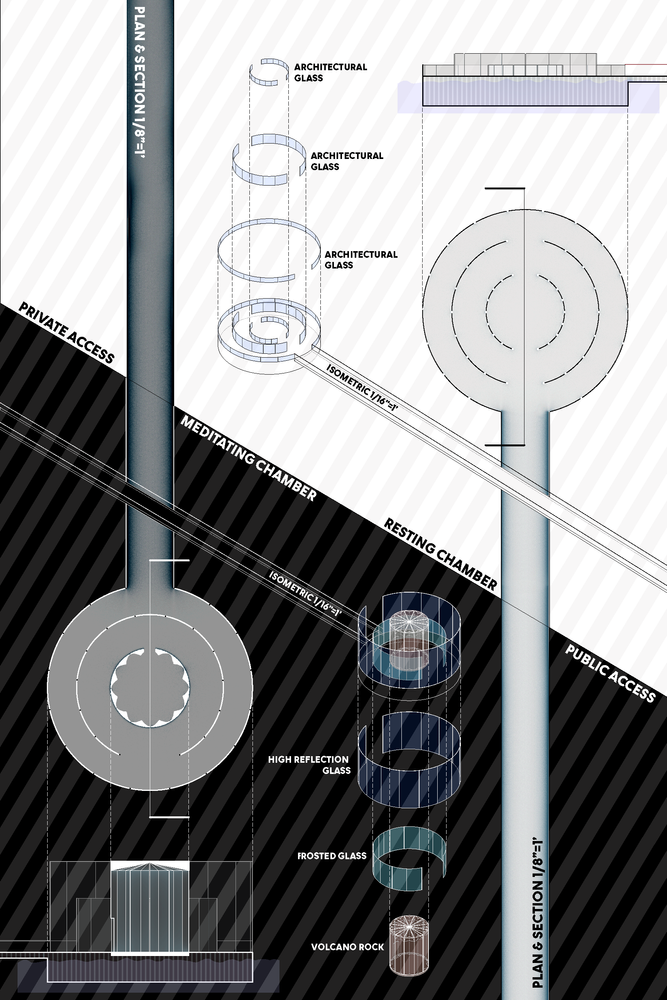 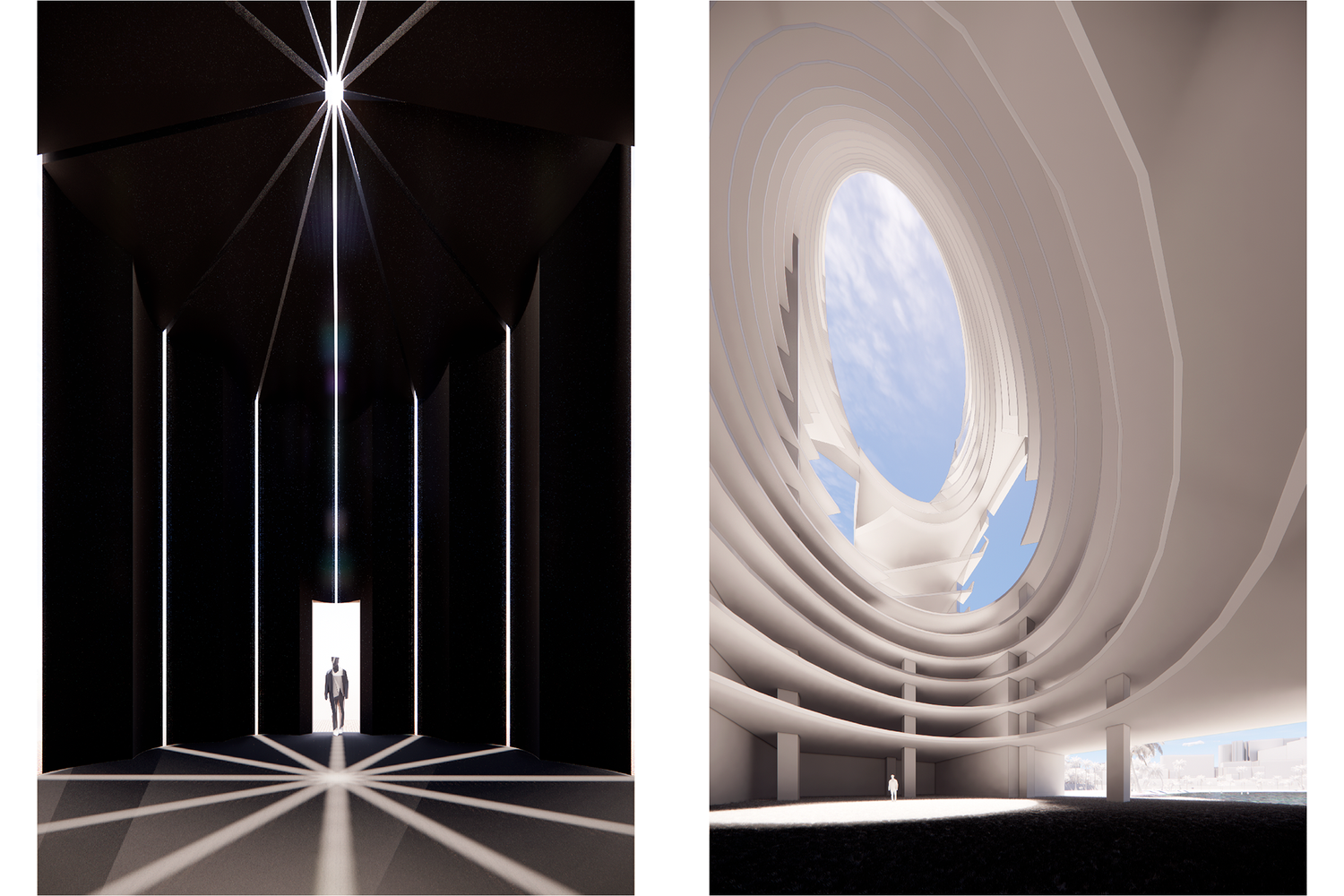 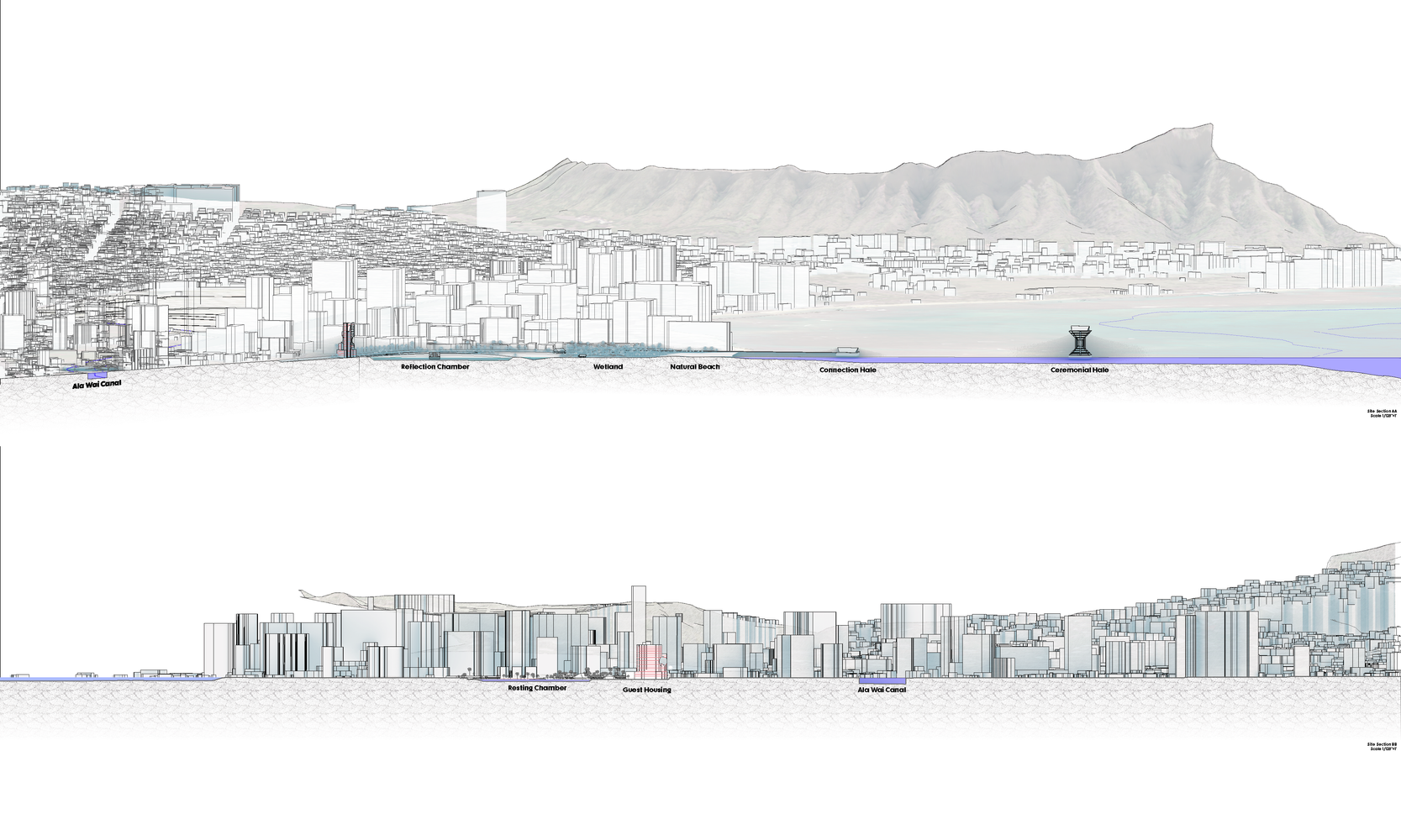 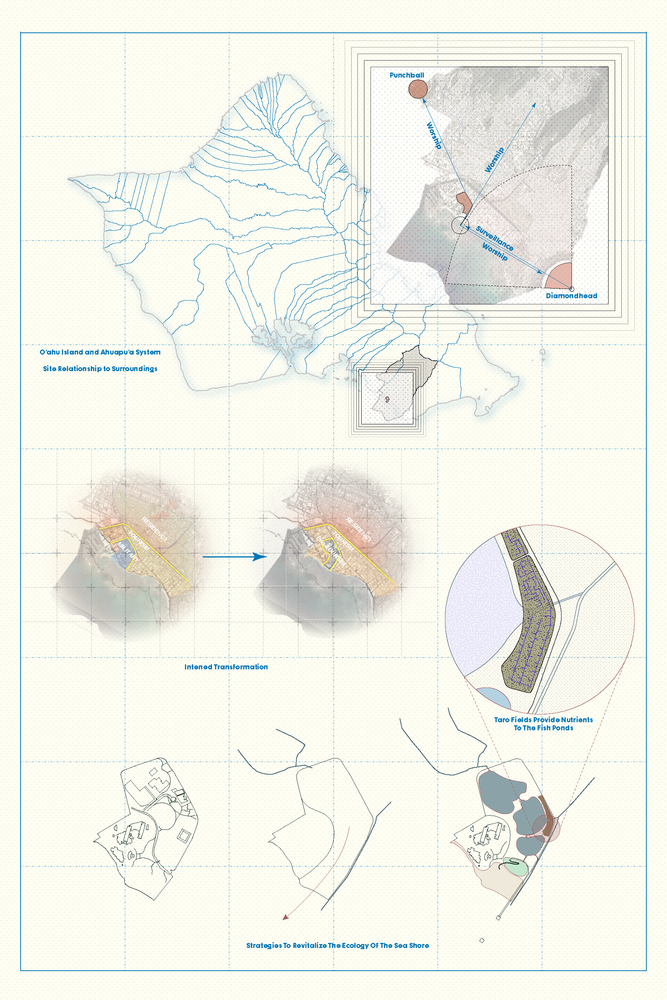 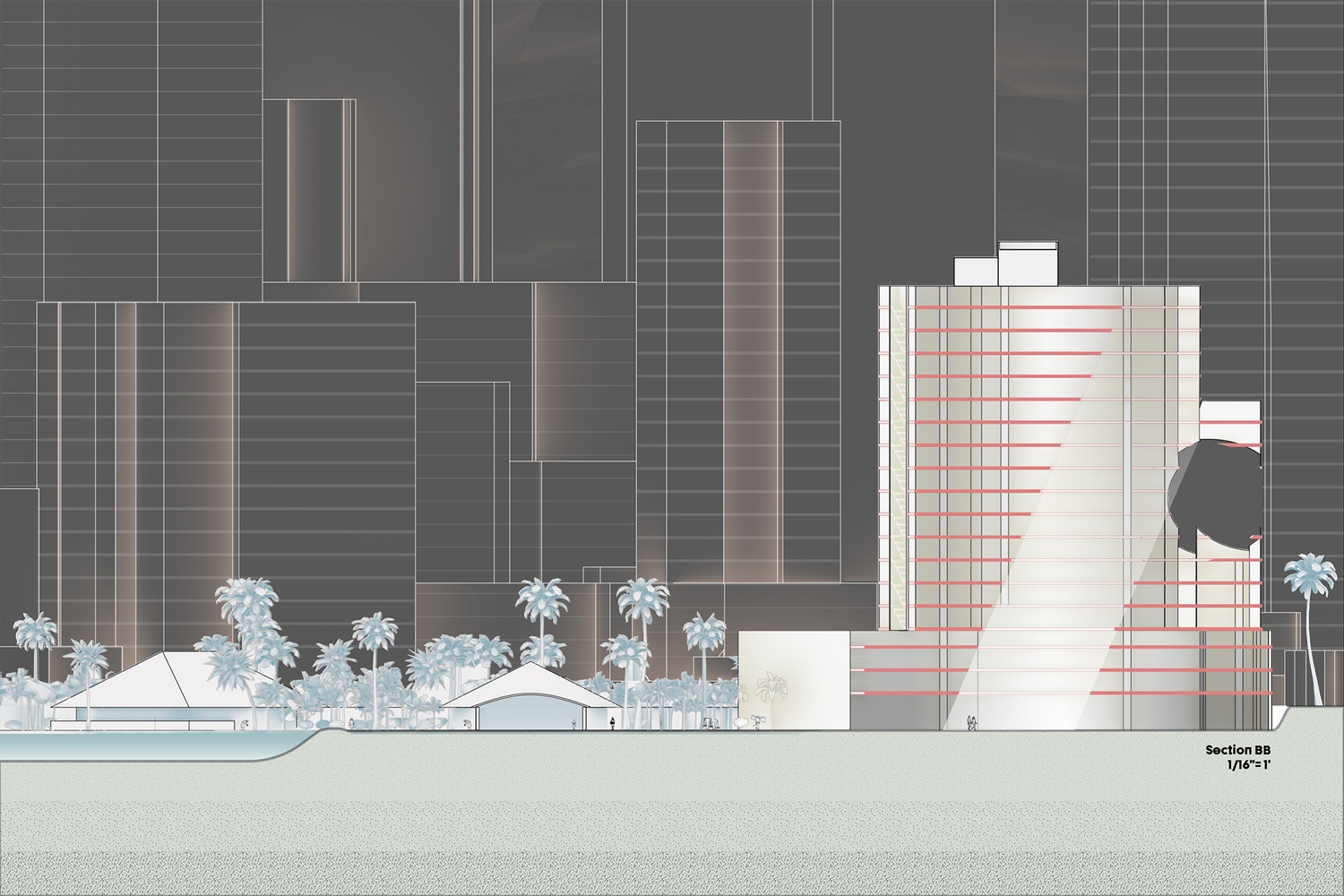 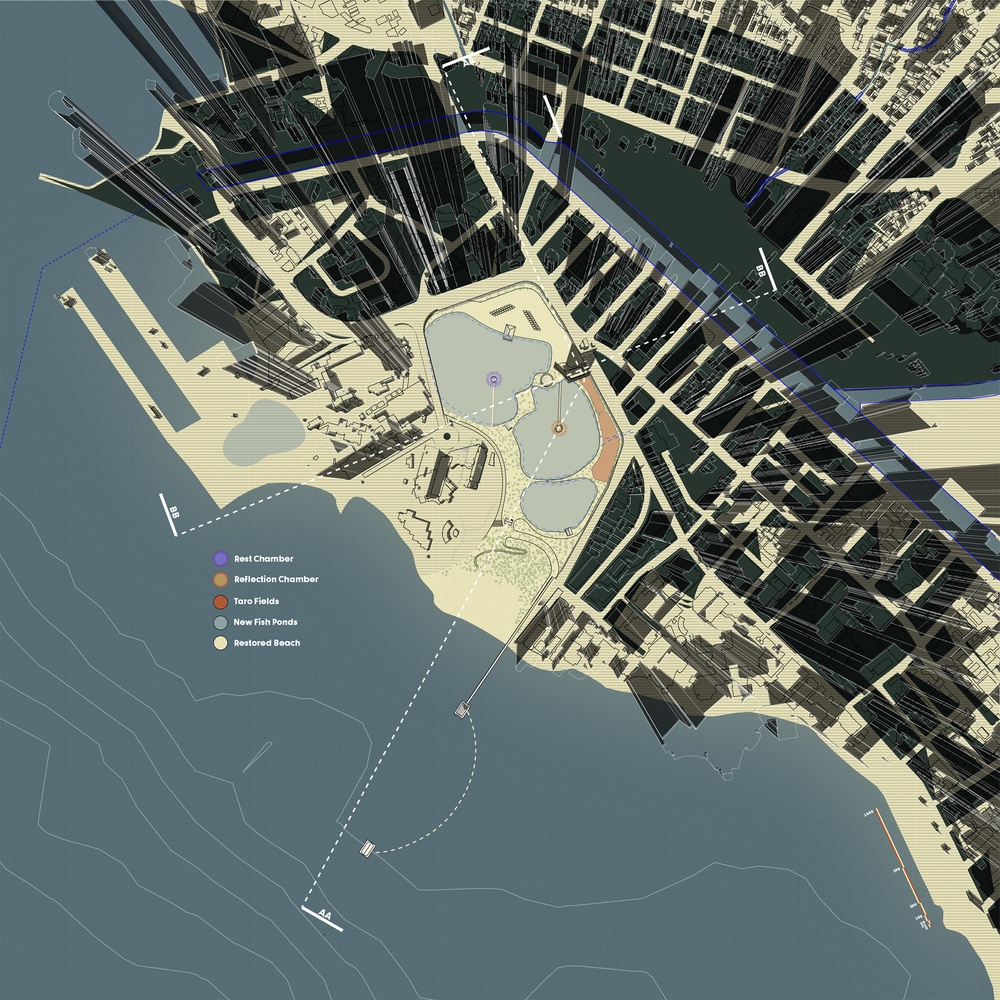