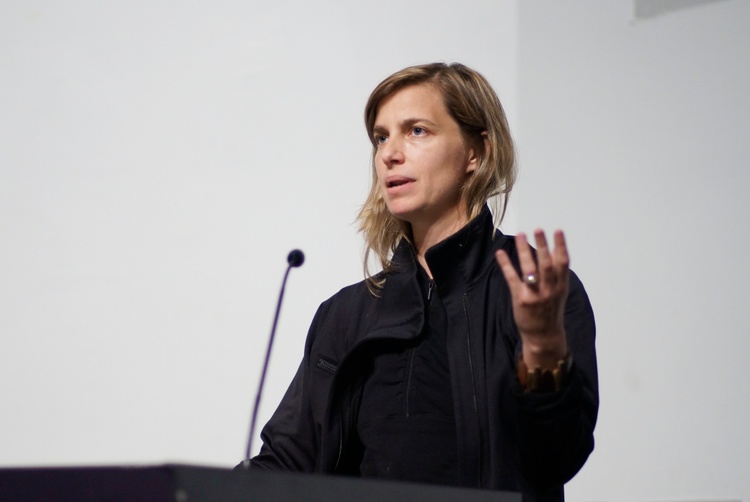 As of June 2015, Associate Professor Katherine Orff has assumed the directorship of the Urban Design Program at Columbia University’s Graduate School of Architecture, Planning and Preservation. A faculty member who has been a key part of both the Urban Design Program and the School for many years, Kate is an internationally renowned award-winning practitioner focused on urban design in the era of climate dynamics. “Kate’s expertise in weaving together urban design, landscape and architecture towards a more ecologically sensitive, adaptive and resilient approach to designing our built environment, will expand on the Program’s outstanding foundations, with a strong focus on research and real-time engagement with the global and environmental urban challenges ahead,” said Dean Amale Andraos.

Orff succeeds Professor Richard Plunz, one of the world’s leading authorities on urban housing, under whose leadership the three-semester Master’s Program expanded to over 50 students and demonstrated the value of collaboration and interdisciplinary exchange. The Program’s success attracts a highly diverse student body, who graduate to become leading urban scholars and designers, teaching and practicing around the world.

Orff plans to build interdisciplinary dialogue around the thematic of climate change and social justice through design. “My goal is to magnify the social and humanitarian ethos that the Program is well known for, and bring it together with themes of infrastructure, urbanism and climate dynamics,” said Orff of her outward-looking approach. In her time at Columbia, she has led a range of cross-disciplinary collaborations, teaching joint seminars with the MS in Sustainability Management Program, and joint studios exploring sustainable development, resiliency, and community-based change models with the Earth Institute and the Real Estate Development Program. She plans to continue to forge university-wide connections around the design of cities in her new role.

She has worked collaboratively in her professional practice, as well. She is a registered landscape architect and founder of the 20-person, New York City firm SCAPE. SCAPE’s joint physical-social infrastructure project in Raritan Bay, Living Breakwaters, was awarded a $60 million implementation grant by the U.S. Department of Housing and Urban Development as part of the post-Hurricane Sandy Rebuild by Design Initiative. Once completed, it will help to protect Staten Island from future storms, enhance maritime ecosystems, and connect residents and students to the shoreline via the Billion Oysters Project curriculum. Winner of the 2014 Buckminster Fuller Challenge, Living Breakwaters is part of a continuum of work that advances a holistic understanding of human ecology. This view began with a 2006 study of Jamaica Bay, later published in Gateway: Visions for an Urban National Park (Princeton Architectural Press, 2011), and was further developed in the 2010 installation titled “Oyster-tecture” as part of the exhibition Rising Currents: Projects for New York’s Waterfront at the Museum of Modern Art.

Orff’s recent book and traveling exhibit Petrochemical America (Aperture Foundation, 2012) integrates photographs by the acclaimed photographer Richard Misrach, environmental data, social narratives and drawings in a detailed visual essay that links the lived experience of local communities, degraded landscapes, and public health to national patterns of resource consumption and global waste. In a September 2014 conversation with journalist Naomi Klein hosted by GSAPP, Orff outlined three ways in which designers can tackle the challenges of climate change. The first is by conceptualizing and connecting the dots. “We are visualizers and integrators.” The second is by adapting and engaging. “We can understand the world as it is, but engage people in a change-orientated process.” Finally, by imagining sustainable futures and “envisioning and designing the world as we want it to be. How can we imagine new energy landscapes, and what are their impacts? How can we decarbonize our settlement patterns and move forward?”