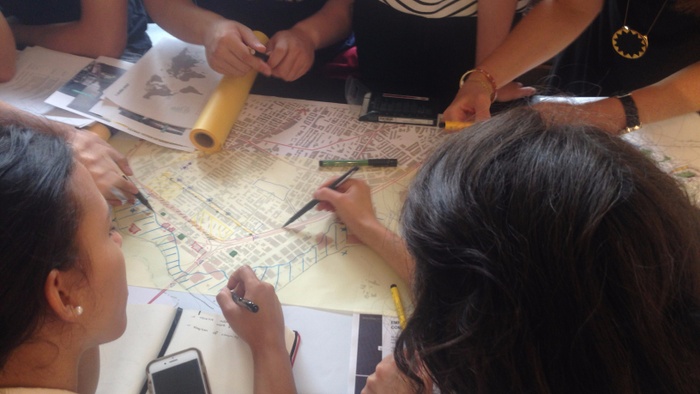 Student Charrette in the Hudson River Valley.
1
From the Director

Happy Summer! I am thrilled to share news of the 2017 Urban Design program, and I feel fortunate to be working alongside our distinguished faculty to inspire and inform the next generation of urban change-makers. I am grateful for your ongoing support of the program, and for your interest and enthusiasm as we work together to shape a meaningful curriculum that works across scales from micro-urban interventions to macro-regional ecosystems, and that bridges research and activist modes of Urban Design practice. Listen to the podcast of my recent conversation with Dean Amale Andraos on the future of Urban Design:

This year we witnessed the full impact of curriculum innovations in response to student and faculty input. The result was astonishing: a new level of sophisticated design thinking, palpable across the studio, and evidenced by information-rich drawings, and highly-skilled mapping and visualization. And after the final review, we had an almost giddy end-of-year party for students and faculty to celebrate all of the hard work.

ALUMNI: SAVE THE DATE! On July 17, 2017, the Urban Design program is hosting a symposium on the UD Sessions: Expanded Field of Urban Design. More info to follow soon. Please mark your calendars and join us !

Please join me in congratulating the class of 2017 and wishing them all the best as they move back out into the world to engage Urban Design as a tool for helping cities and people adapt to a changing climate, unjust social conditions and manifold resource scarcities.

We are excited that several adjunct faculty will expand their teaching duties this summer. Prof. Kyle Hovenkotter will lead the Digital Tech sequence and develop our students’ digital and representational skills in close coordination with the GSAPP Skill Tree and the Center for Spatial Research. The Urban Design program and the school’s Visual Studies faculty have worked closely with Prof. Cassim Shepard to expand his teaching from the Reading New York Urbanisms summer course into additional seminar offerings next year – Montage City and Narrative Space – to enable our students to do more advanced elective work in visualization. Michael Murphy, whose firm MASS Design Group focuses on architecture relative to health and human livelihoods, won a 2017 Cooper Hewitt National Design Award. Michael will be returning as a visiting critic in the Fall Semester studio on the Hudson Valley and helping to advance the Hudson Valley Initiative.

This summer the UD program has enrolled our first students in the UD+Research semester – for which students must apply. The goal of UD+R is to give students an opportunity to extend and deepen their studio work from the previous year. Enrolled students take an independent studio with David Smiley and Kate Orff, and a research methods seminar with Prof. Anthony Acciavatti.

The themes of climate and justice framed our work in the studio work this year.

The class of 2017 presented their Spring studio work for two fascinating places facing dramatic change: Amman and the Jordan River Valley, and Kolkata and the adjacent Sundarbans Mangrove forest, in eastern India. Reviewers included academics, professionals and NGO leaders from each region. The studio work explored visionary scenarios for needed climate adaptation since extreme weather events – both flooding and drought – threaten the vital social nexus of food, water and energy in these dense places. The students’ work was on display in Avery Hall during the End of Year Show, and will soon be published as digital publications on our online digital reader platform as well as in upcoming exhibitions in Amman and Kolkata.

In Amman student projects aimed to discover: what alternative spatial and political organizations are possible relative to water and new eco-agro-industrial paradigms? What economic investments will shape Amman over the next half-century, and how can urban design scenarios based on resource recovery – instead of extraction and waste paradigms – advance change? How can borderlands and contested territory become spaces of production and exchange?

In Kolkata, student projects explored: how can the Sundarbans and Kolkata be framed as a shared ecological and economic region? How can wetlands be re-valued? How can social ritual be tied to ecological regeneration? How can design foster Kolkata’s long term, sustainable and adaptive growth? Overall, our investigation of the Sundarbans and the Hooghly district aimed to make communities ecologically and socially resilient to natural calamities and manmade hazards.

This summer, under Prof. Kaja Kuhl’s direction, incoming MSAUD students will be looking at challenges of equity, infrastructure, mobility, and density in the five boroughs of New York City in light of Mayor Bill De Blasio’s commitment for expanded ferry service. Stay tuned for more information on this timely design investigation. 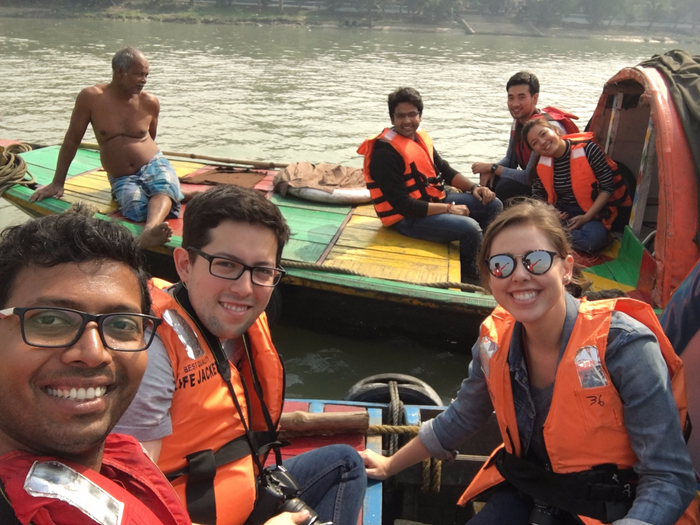 This Spring, the program hosted and participated in a range of lectures and symposia, including:

Planning and Design for Future Informal Settlements, Cities and Climate Action, and, just after the final review, Displacement_Water. This latter discussion examined the role of water in the design futures of cities across the globe. Jointly hosted by the Columbia GSAPP Urban Design Program and an American Institute of Architects, NY Chapter, Global Dialogues series, the discussion featured DK Osseo-Asare, founding principal of Low Design Office as well as UD professors Dilip DaCunha, Guilherme Lassance, Nora Akawi, and Geeta Mehta; the discussion was moderated by Kate Orff. 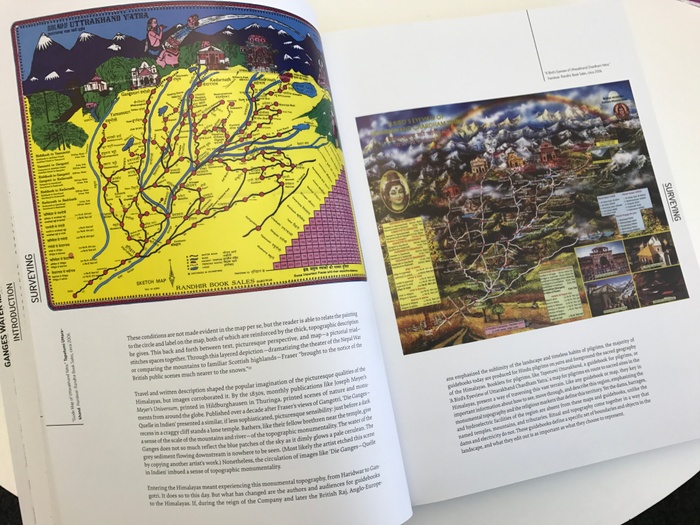 This year, history and theory Prof. Anthony Acciavatti was a fellow in the Program in Agrarian Studies at Yale University where he has been working on the history of villages and urban development in India since the late-nineteenth century. With the support of a National Science Foundation grant, he has also been developing an exhibition of related model villages and agricultural co-operatives. If you are in Mumbai next Fall, visit Acciavatti’s exhibition of drawings and models from his award winning 2016 Ganges Water Machine: Designing New India’s Ancient River. The exhibition is part of a Ford Foundation grant awarded to Acciavatti, along with Dr. Ravina Aggarwal (Director of the Columbia Global Center, Mumbai) and Dr. Upmanu Lall (Professor and Director of the Columbia Water Center).

Fall Studio Prof. Sandro Marpillero, with his firm Marpillero Pollak Architects, completed the Elmhurst Public Library, a 30,000 square foot building in the borough of Queens, New York City. The new Library fulfills the reading, research and community needs of 80,000+ users speaking more than 57 languages at the heart of the borough’s expanding immigrant population. Marpillero also collaborated with artist Allan McCollum on the design of several interior spaces of the building. The project is the largest realization of the NYC Department of Design and Construction’s “DC Excellence 2.0” program.

Fall studio Prof. Justin Garrett Moore, head of NYC’s Public Design Commission, made presentations this year at the annual meetings of the Congress for New Urbanism – on “Diversifying Urban Design” – and the American Planning Association – on his work on a new technical assistance project for a waterfront neighborhood in Belize City, Belize. At the APA conference Moore also participated on a panel with heads of public design agencies in Seattle and San Francisco, discussed the citizen-led, crowdfunding nonprofit ioby.org with community leaders in the Bronx, and discussed social and racial equity with black urban planners and designers, including Shin-pei Tsay of the Gehl Institute and James Rojas of “Place It!”

Fall Prof. Lee Altman participated in several key urban discussion events, including the Healthy Cities panel at NYU’s Wagner Graduate School of Public Service, and the Designing the Next Generation of Public Housing panel which she moderated, at the AIA’s Center for Architecture in NYC. Altman’s work on Healthier Cities was recognized by the New York Times last year.

This coming Fall, Prof. Kaja Kühl – continuing her work on the ongoing global refugee crisis – will collaborate with faculty from the University of Leuven in Belgium and the University of the Arts in Berlin on the Spaces of Migration workshop, focusing on refugees in Berlin. This international workshop will develop prototypes and interventions in Berlin’s Lichtenberg neighborhood to activate the economic and socio-cultural potential of refugees who arrived in Berlin in recent years and still live in temporary shelters. Students and professionals are encouraged to participate.

Prof. Geeta Mehta was interviewed for the production of a new movie about Jane Jacobs, called Citizen Jane: Battle for the City, currently in theaters.

Guneet Anand and Eri Suzuki, both MSAUD ‘14, participated in a Pecha Kucha session at the annual meeting of the American Planning Association, this year in New York City. They also organized a reunion in the City with others in their class.

Yin Kong, MSAUD '05, returned to NYC after several years in Beijing, and recently helped produce a Chinatown Community Plan for the NYC Department of Cultural Affairs.

On a broader, regional level, Arshia Chaudhri, MSAUD '15, is seeking to connect with alums in the Delhi region, India. Please contact her, and share with us, if you’d like to talk and connect.