Happy New Year. This year will bring great challenges and opportunities in the realm of infrastructure, urban design and climate change. More than ever, Urban Designers are poised to not only think holistically and long-term about the challenges of global urbanization, resource extraction, politics, ecology, and community engagement, but to embrace an activist approach in shaping our built environment. Columbia’s Urban Design pedagogy is uniquely positioned to challenge inherited design methodologies, and synthesize design and science, moving seamlessly from large scale politics and mapping analysis to micro public space design.

As I write, our nearly 60 students and faculty are returning from studio trips to Amman and the Jordan River Valley, and Kolkata, India and the Sundarbands mangrove forest. During these intensive workshops students engaged issues of water infrastructure, densification, borderlands, and climate migration.

This Spring we are also offering a new seminar taught by Michael Kimmelman, the world-renowned New York Times architecture critic. Most recently he has been focusing on global cities and climate change, which is the subject of his seminar.

We continue to be astonished at the depth, breadth and diversity of our UD Alumni Community, who write with news from across the globe and share how they are positively impacting the world through teaching, practice and advocacy. Please continue to share your news and ideas with us.

In 2016, the UD program introduced a new research opportunity for recent grads – the Advanced Research Semester (UD+R). We aim to have our first students this summer! This extra semester provides a unique opportunity for Urban Design students continue exploring the problems and possibilities of global urbanization. Accepted students expand previous research or create new projects, both based on the questions they encounter during the three-semesters of the program. Students apply to UD+R with a proposal so they hit the ground running, and they take an independent, supervised, workshop as well as a research methods seminar. We encourage proposals that address climate change, ecological infrastructures, urban and regional inequalities, and new forms of land use and development. Projects also address multiple actors, scales and networks, the nature of urban professions, and include various forms of work and media. We are optimistic that the work will expand the knowledge base of the profession, and of urban change more broadly.

In 2016, the UD program also began a new research project called the Hudson Valley Initiative. For several years, UD and other programs have conducted projects in the Valley and it became evident to us that a more coherent, shared and long-term approach is necessary. The scale, history and complexity of the Hudson Valley region requires a new form of study. Extending several hundred miles north from Manhattan, touching five states, the region includes nine counties, 13 cities and over 200 villages and towns, and its watershed covers over 13,000 square miles. The status and future of this area deeply affects the lives of millions, from New York City to a broad swath of the American northeast. 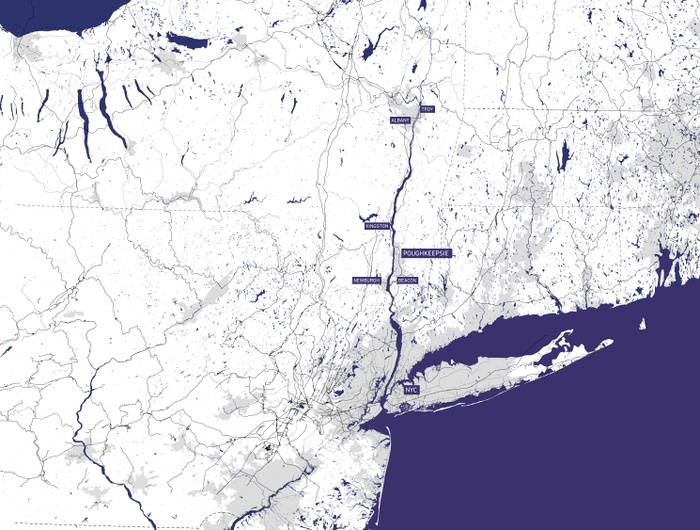 Through the HVI, Columbia and the GSAPP will play an active role in helping the region grow and change. By serving as the GSAPP clearinghouse and archive for urban design, architecture, landscape, preservation, and planning work, the HVI will enable cross-disciplinary contributions to the long term health and viability of the region. Moving beyond the semester-based curriculum model, the HVI will enable different programs to create and share research, to maintain region-wide contacts, to create and organize public programming, and serve as a link between the school and the cities and towns of the Hudson Valley.
3
Studios

/
The Fall 2016 UD City-Region Studio continued the program’s commitment to the Hudson Valley, this year exploring what we call “Justice in Place,” through our work in the city of Poughkeepsie and its surrounding area in Dutchess County, New York. The studio was coordinated by long-time professor Lee Altman and a new visiting faculty Michael P. Murphy, Jr., co-founder of Mass Design Group. Drawing from the evolving discourse of spatial justice brought to the fore by scholars like Edward Soja as well as groups like Black Lives Matter, and responding the shifting political climate that dominated the public arena in the Fall of 2016, studio projects identified various manifestations of injustice – social, economic, environmental, and others - and proposed design strategies to challenge them. Other faculty were: Pippa Brashear, James Carse, Christopher Kroner, Sandro Marpillero, Justin Moore, and Assistant Director David Smiley, with Eleni Gklinou and Nans Voron.
Desk Crits in Lee Altman and Michael Murphy’s Hudson Valley Studio
Urban Design Crits

/
Student work from the semester is currently on view in an exhibition at the Mid-Hudson Heritage Center on Poughkeepsie’s Main Street, and there will be an event including public discussion on January 28th. We hope that this work will be expanded in the coming years via the Hudson Valley Initiative. Looking ahead, our spring semester work continues to focus on issues of water infrastructure and urbanization in Amman, Jordan and Kolkata, India - two regions vulnerable to climate change via scarcity and inundation. 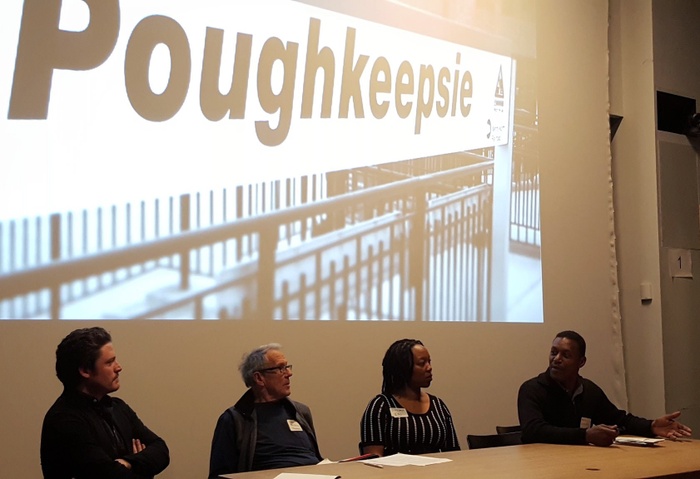 Urban Design Final Review jury
4
Lectures & Events
Over the past two years, the faculty have developed an Urban Storytelling theme in the curriculum, testing different aspects of digital media – from film and video to various forms of digital animation and information mapping. In the Fall of 2015, we conducted a storytelling conference with the School of the Arts and their chief digital storyteller Lance Weiler, and this past Fall we conducted a storytelling conference titled Representing Urban Design with the School of Journalism. The event included filmakers and documentarians Eleonore Hamelin, Jamil Lahham and Thatcher Bean, and the Journalism School’s own June Cross. Our student’s films were screened, and faculty Cassim Shepard, James Carse and Nans Voron showed work and offered comments. We are thrilled to make these connections across the university, and learn other ways to use digital media. More is on the way! 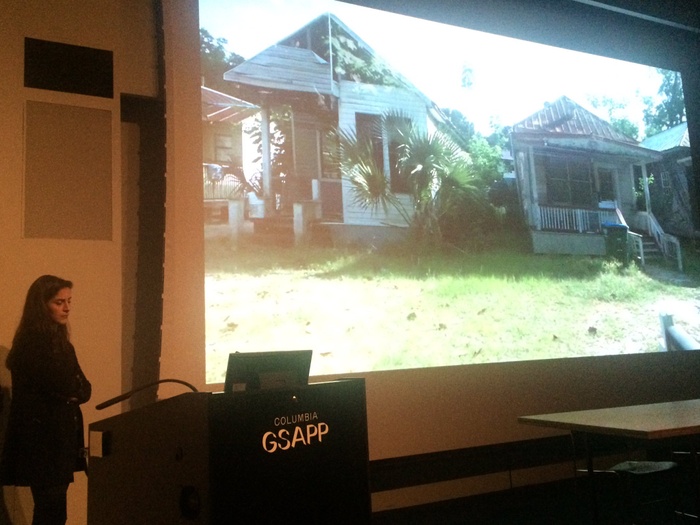 Noah Chasin, who teaches our summer history and theory class, conducted an interview with faculty member Laura Kurgan for the arts magazine Bomb. Laura is an Associate Professor at Columbia GSAPP and one of the leaders of the Spring UD studio. She is renowned for the work of the Center for Spatial Research. The Interview probes the problems and questions raised in a world where data, policy and space are increasingly entwined.

Spring Studio instructor Geeta Mehta continues to be globally recognized for her work on Social Capital Credits to empower communities.

Each summer, the program’s Five Boro Studio, led by Kaja Kühl, works with local communities in their exploration of New York City’s neighborhoods. In 2015, students worked with the Brownsville Community Justice Center and their youth program to develop design ideas for a Youth Clubhouse for Marcus Garvey Village in Brownsville. Students and local youth discussed their designs with Professor Kenneth Frampton, one of the original architects of MGV. Following the studio, faculty members Kaja Kühl, Tricia Martin and class of 2016 alum Nicolas Del Valle Russell offered pro bono design assistance to build the Clubhouse, which opened in Fall 2016. 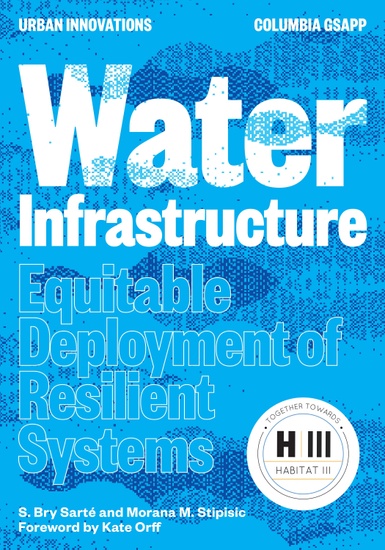 Water Insfrastructure (Columbia GSAPP, 2016)
Faculty Bry Sarté and Morana Stipisic’s recently published book Water Infrastructure: Equitable Development of Resilient Systems was named one of the best books of 2016 by The Dirt, the blog of the American Society of Landscape Architects.
6
Alumni Updates

We are continually inspired by the breadth and diversity of leadership, activism, and engagement with the built environment by our intrepid UD alums.

Three alums, all MASUD ‘11 and members of Hive Public Space – Racha Daher, Alexandra Gonzalez, and Elena Kapompasopoulou – won the Van Alen Competition Open Poll: Reflecting on the Elections. The project, Voting at Your Fingertips, seeks to change the way the voting process works – using new technologies as well as more polling stations – and to boost the perception of voting as a celebration of democratic process and community relations. Racha will also be teaching this Spring in Suzhou, China.

Jimena Romero (MSAUD '14) works for the Municipality of Quito as Coordinator of the City’s Innovation Lab. Along with many UD alums and faculty, she participated in the Habitat III conference, where she exhibited projects from several Ecuadorian cities including at Cities for Life and Vive Alameda. In 2016 Jimena was recognized as a Global Shaper and was selected to be part of Georgetown University’s 2017 Global Competitiveness Leadership Program.

A more recent alum, Sebastian Delpino (MSAUD '16) has been busy at work in Chile. After being awarded the Percival Goodman Fellowship, Sebastian is organizing an urban participation event called Citizen Press to help the citizens of the village of Santa Teresa, who were displaced by a landslide, have a voice in the process of redevelopment. In addition, Sebastian won a national competition for the design of a circuit of viewing platforms on a 500 kilometer stretch the Carretera Austral in southern Chile. The project celebrates the geographic and environmental diversity of the Patagonian landscape. Sebastian also teaches architecture at the Diego Portales University in Santiago.

If you are looking for a job or thinking about career options, see Columbia GSAPP’s Career Services page.