The following text is an edited transcription of GSAPP Conversations Episode #8, a podcast produced by Columbia GSAPP’s Office of Communications and Events in collaboration with ArchDaily.

James Brillon, a second-year Columbia GSAPP M.Arch student speaks with Tatiana von Preussen (M.Arch ’07), Catherine Pease, and Jessica Reynolds, the co-founders of London-based vPPR Architects. They met at Avery Hall prior to the trio’s lecture in January 2017, and discuss how the firm uses precision, geometry, light, and communal space to overcome the extreme constraints of developing housing on infill sites in dense London neighborhoods.

When asked for advice during the charged political environments in the United States and Europe, they encourage young practitioners to “exercise your democratic rights, protest and make your voices heard, and keep being idealistic. Because in the next few years you’ll be the people who are making the decisions, and it’s really important that you don’t lose sight of the idealism you have as a student.”
–vPPR 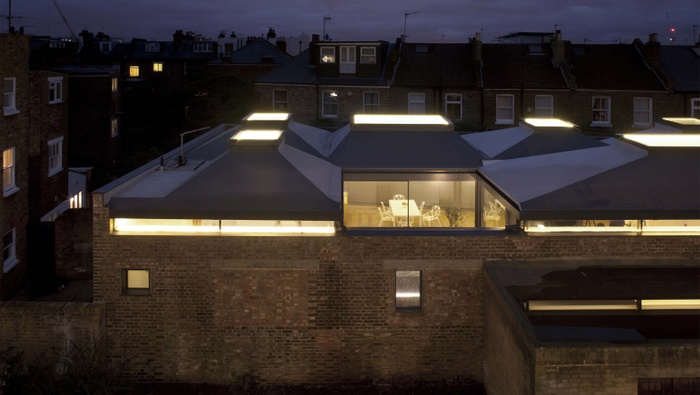 vPPR: A lot of the sites that we build on are infill sites, they’re not sites that traditionally would have housing on them. So in a way it’s discovering a new typology. There’s kind of a sense of exploring a new kind of architectural language I suppose. And one of the ways in which we’ve done that is to bring certain kind of geometries and patterns to the site and allow those to generate the plan – and then you’re kind of down to the details, so that there’s a consistent coherent language that goes through all of the scales of the project. That’s something that we’ve been exploring in various different ways, but also whether the geometry itself is not just an aesthetic decision, but also creates certain unexpected relationships between different programs – different rooms and their functions.

JB: I’d like to bounce off what you said about infill because that’s something that is actually seen in a few of your projects. What are the challenges of designing in a city such as London, where land is less and less available and it can be a challenge to actually find these sites and subsequently develop housing?

vPPR: Well, there are so many constraints in London. And as land prices are going higher and higher, people are discovering more spaces to build on that they wouldn’t previously have thought would have any value. It’s gaps between buildings, or leftover spaces in the city, or on top of roofs – there are all these new types of sites. And as people are starting to develop these sites, local governments are introducing more and more policies and guidelines in terms of how you can develop them. Over-looking and privacy are major issues, because often these very constrained sites are very close to lots of other neighbors. So how you don’t have a negative impact on neighbors is very important, and that you don’t affect their rights to light.

vPPR: I might add that although there are all these restrictions, as a young practice they offer us an opportunity to create something different. So unlike a typical street where you might create a terraced house, you really have to come up with unusual solutions. And that brings us back to the geometry, which is a tool for us. We’ve been able to get lots of attention through these unusual proposals which inevitably came out of these weirdly shaped sites.

And what’s interesting is that originally it was individuals and private developers who developed these difficult infill sites. But there’s such a shortage in housing that local government councils were formed in Britain and they are now looking at their own land to see what opportunities there are to design on this government-owned land. And you can actually build hundreds of thousands of new homes on this land that previously had been seen as unviable.

vPPR: And there is currently a major housing crisis in London – and many other cities, too – so it has become a very topical issue.

vPPR: And in London, over 50 percent of all new housing is built on these small sites. And they are often built by small developers. So it’s definitely become a kind of trend in the city. It’s a huge challenge to try to rework this.

vPPR: Another constraint within these strange sites, even though they’re completely new typologies, is in terms of materials. The planners are quite – well, they like brick… It’s a very non-controversial material. So we do try and push the limits of that, like different techniques of brick, like in a brick wall trying to push different materials. But there’s also that as a constraint.

JB: Besides brick, which is maybe an extrinsic factor that you don’t have much control over, a lot of your projects seem to aim at distilling a concept to its most simple form. That’s something we often seem to struggle with in the studio throughout a semester, or throughout the academic career: simplifying projects to the extreme. I was hoping that you could describe the process of how you achieve that within your firm.

vPPR: As a starting point, we identify the opportunities and constraints of a site. And we are always trying to work inside-out and outside-in at the same time. So we have programmatic organizations we’re trying to reach within the brief, and then we have the site constraints – this might be the shape of the site or the way the roof can work, and then we’re working outside-in. It takes a lot of time.

vPPR: The simplicity of the plans is really an illusion; in order to get these seemingly extremely simple forms and extremely simple concepts to work, there’s a huge amount of trial and error. And there will often have been numerous options, different kinds of geometries that we’ve tried on the site. For instance, with our Ott’s Yard project, which has a triangular site and is subdivided into these fractal triangles, we tried many different options.

And even though it seems to suggest that this fractal plan fits beautifully, it was in fact incredibly complicated to try to get all of the program to fit in that site and plan. It involved shifting a lot of very infinitesimal angles just to get enough space to walk past the bed, or in some areas we had to slightly snub off one of the triangles to get enough width. And in the sections, as well.

And when you’re dealing with diagonals in a site, if the contractor is a tenth of a degree off, further down the site it could totally throw the whole thing off-whack. So it’s actually very, very precise. And I think it would be very difficult to design these sites without the aid of digital design tools and being able to translate those out to a site.

vPPR: Another example is Vaulted House, whose main geometry is the vault. The roof is a series of these vaulted skylights, and the vaults come together in these pure lines that are really crisp. So the detail is so modern, and yet hidden behind this apparently floating light-weight roof are these huge steel beams. So it’s very much about how all that detailing comes together, and the precision of working with all the different consultants and making sure the alignments are correct.

vPPR: It’s a labor of love.

JB: Absolutely. Many of your projects also have courtyards that we see in the plan. Can you describe the importance of these courtyards and how they relate both to interior spaces, but also to the public domains, the street? Or in certain cases when you’re working with infill lots, I imagine that it’s a challenge to design these spaces.

vPPR: Often on an infill site, you’re not allowed any windows in the perimeter walls because they would be overlooking somebody’s garden or into their house. So all of the light has to come from above. As a solution to that, we often put living areas onto the upper floor, and the bedrooms and bathrooms lower down. And then the courtyards are a way of bringing light down to these lower spaces. But they also become, as you say, a kind of common or shared room. In Ott’s Yard, the courtyard between the houses is a really important social space around which the two houses pivot. And it’s used like an outdoor room. There’s a table and chairs and barbecue, and children and dogs play in the area between the two houses – it’s a very communal space.

JB: Since you opened in 2009, the firm has stayed very small. Can you describe the impact that that’s had on your projects or on your design process? And do you have any intention of expanding or growing as a firm?

vPPR: I think life is all relative. For us, we are growing – slowly but steadily.

vPPR: We’re now 12 people. We started as 3 and I think we wouldn’t want to suddenly expand too quickly. We’re aware of all the systems at play in an office. But our projects are getting larger, and that requires larger teams.

vPPR: Actually the small-scale projects we’ve done have allowed us to develop a language. And now we are all very attuned to the way we think, which as three directors is very important. And a lot of these ideas can translate so well to certain larger projects. And getting larger, you know, means being given larger projects – so we’re waiting for them to come our way.

I think that’s a frustration as a young practice. We started very young, we were 27 when we set up. And there’s always that feeling that you really can do bigger things, but it’s just a matter of building a reputation around the practice – which is definitely happening at this point.

vPPR: It’s happened so often where we get very close, like we get short-listed or come in second in a competition to design something, like a library. And then we don’t win because we haven’t already built a library. It’s a catch-22 we’re still figuring out.

vPPR: And I think the projects are incrementally growing larger. We started of with one unit or two units, now we’re doing 10, 12, 20 units. And as you jump up in scale, you do have to revisit your design principles because it doesn’t neatly translate. But there are many things that pass from the small projects onto the larger ones. And I think we’re definitely ready for much bigger projects.

JB: Well, that’s very exciting. You started your firm in 2009 as I mentioned, a time of global turmoil. Today, in 2017, do you have any advice for frightened graduates who might be venturing off into the world?

vPPR: We don’t know what the future holds!

vPPR: We were talking about moving to New Zealand… Yes, I think it is a very scary time. I would say exercise your democratic rights, protest and make your voices heard, and keep being idealistic. Because in the next few years you’ll be the people who are making the decisions, and it’s really important that you don’t lose sight of the idealism you have as a student.

JB: Well, terrific. That’s very well said. Thanks again for taking the time to speak with us.